The newspaper clipping being widely shared stating 4000 RSS workers arrested, claimed to be from 1971 is fake and has been created digitally. 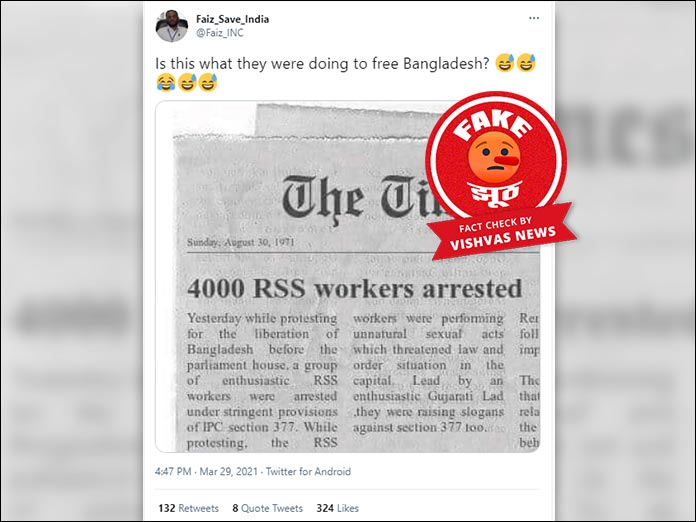 Vishvas News came across a tweet by Faiz_Save_India @Faiz_INC, sharing the newspaper clipping, he wrote, “Is this what they were doing to free Bangladesh?”

The content of the newspaper clipping was, “Yesterday while protesting for the liberation of Bangladesh before the parliament house,a group of enthusiastic RSS workers were arrested under the stringent provisions of IPC section 377. While protesting, the RSS workers were performing unnatural sexual acts which threatened law and order situation in the capital. Lead by an enthusiastic Gujarati Lad, they were raising slogans against section 377 too.”

This lead us to a website that generates newspaper clippings online.

The newspaper snippet shown on the website was very similar to the one being widely shared online.

Check the similarity below:

We checked through keyword search whether the RSS workers were arrested in 1971. This led us to a report published by The Times of India on March 27, 2021, “PM’s Satyagraha talk in Dhaka sparks online war“. The print edition, published an archive from August 12, 1971 that did say, “10,000 Jana Sangh men court arrest in Delhi”

The text in the news said, “New Delhi, August 12.
Over 10,000 Jana Sangh workers, including 1,200 women and children courted arrest here today on the 12th and last day of the ‘Recognise Bangla Desh satyagraha’.”

Check the newspaper clip below.

This clarifies that the not RSS but Jana Sangh workers were arrested in the year 1971 for the Bangladesh protest which is also mentioned in the viral post.

In its last step of investigation, Vishvas News contacted the Akhil Bharatiya Sah Prachar Pramukh of Rashtriya Swayamsevak Sangh, Narender Kumar. He told Vishvas News, “The news being widely shared over internet is indeed fake. This are nothing but ways to defame the Sangh.”

In the end Vishvas News conducted a social background check of the user who had shared the post. Faiz_Save_India @Faiz_INC, is followed by 8952 people. He joined Twitter in September 2014. He has written in the intro, “Support Congress to Save India from Criminals. BJP, RSS, MIM & AAP supporters – kindly stay away.”

Disclaimer: A few minor language and information changes are done in the story which don’t have any impact on the conclusion of the story.

Conclusion: The newspaper clipping being widely shared stating 4000 RSS workers arrested, claimed to be from 1971 is fake and has been created digitally.