Fact Check: 23rd Sept was already scheduled to be a rest day of Cong’s ‘Bharat Jodo Yatra’, had nothing to do with PFI strike 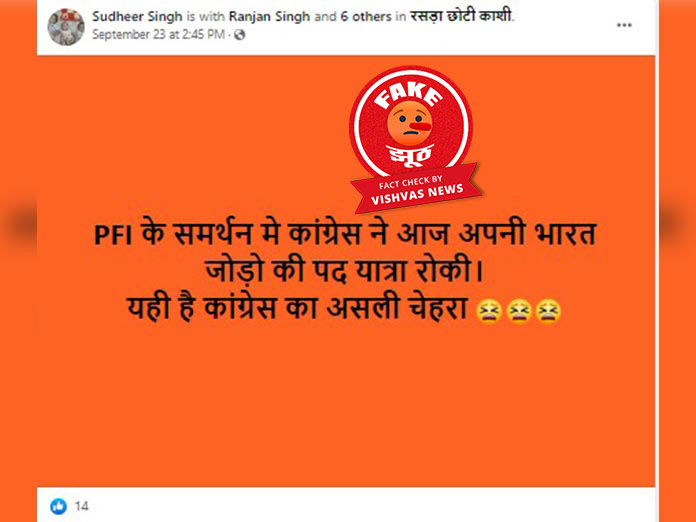 New Delhi (Vishvas News). Congress’s ‘Bharat Jodo Yatra’ took a break on 23 September after a journey of about 350 km. A post about this is going viral on social media where users are claiming that Congress halted ‘Bharat Jodo Yatra’ for a day in support of PFI.

Vishvas News found in its investigation that the claim is false. The rest day was already fixed for 23rd September, while the raids on PFI started on 22nd September.

Facebook user Sudheer Singh (archive link) posted on 23 September: “In support of PFI, Congress today stopped its padyatra. This is the real face of Congress”

To investigate the viral claim, we first did an open search on Google with keywords. We found the link of a news published in Jagran.com on 23rd September. According to this, ‘Bharat Jodo Yatra’ has reached Thrissur in Kerala. Today is the padyatra’s rest day. So far this journey has covered a distance of about 350 km.

According to a report published in the Indian Express on 15 September, “On its eighth day, the Congress’s Bharat Jodo Yatra took a break on Thursday, with Rahul Gandhi and his entourage resting at Pallimukku in Kerala’s Kollam district, where the yatra halted on Wednesday night. The next rest day of this Yatra will be on 23rd September.”

On September 22, Congress leader Jairam Ramesh had tweeted and informed about the rest day of the Yatra on September 23.

From all this investigation, it was clear that 23 September rest day of the Bharat Jodo Yatra was already fixed.

After this we searched about the action taken on PFI. The Hindustan Times reported on 22 September that the NIA has started raids on the offices of the Popular Front of India (PFI) on 22 September. This action of raids has taken place in 15 states.

We spoke to Uttar Pradesh Congress President Ajay Kumar Lallu about this. He says, ‘The claim being made on social media is false. Every eighth day of the yatra has been fixed as a rest day. This program is already set. The schedule for taking a break on 23rd September was already decided.

We scanned the profile of Facebook user ‘Sudhir Singh‘ who made the false claim. According to this, he lives in Andal of West Bengal.

According to the official website of Bharat Jodo Yatra, it started on 7th September and will cover 12 states. The Yatra will cover a distance of 3500 km in 150 days.