Fact Check: Army dogs are not killed after retirement, viral claim is misleading

Indian Army does not kill dogs that retire from service they are sent to Meerut at an old age home for dogs or are put up for adoption. 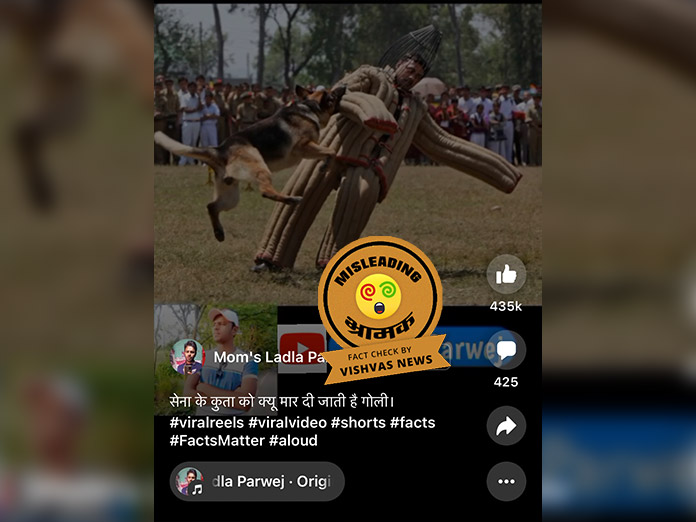 We found a story on website, yourstory.com that said, “In a shocking response to a right to information query, the Indian Army revealed that it euthanises (mercy kills) its dogs on retirement, or at any point when they are judged to be unfit for service beyond a month. This was reported in June 2015, by The Huffington Post. Less than a year later, there is good and life-saving news for the retired canine soldiers. Additional Solicitor General Sanjay Jain has submitted a declaration to the Delhi High Court, saying the government is working on a policy to stop euthanasia of Army dogs after retirement.“

We also found a report on Indian Express website which mentioned, “There was an earlier practice of euthanizing Army dogs after they were no longer in active service. An RTI reply in 2015 giving out this information had caused a public uproar following which the policy was amended.“

In the next step of investigation we connected with Col Amod Kulkarni (Retd). He told us that euthanasia was a common practice around seven years back but was only done to dogs who were very ill. The dogs were not unnecessarily killed. However now even that option has been done away with and the dogs are sent to Meerut and are taken good care of or they are put up for adoption. The practice was also common for horses and mules first but now, even they are sent to Hempur in Uttarakhand.

In the last step of investigation, we did a social background check of Facebook user who shared the viral reel. Mom’s Ladla Parwek has 11K followers and is a YouTuber.

Conclusion: Indian Army does not kill dogs that retire from service they are sent to Meerut at an old age home for dogs or are put up for adoption.