Fact Check: BJP MLA did not give this viral statement on Gujarat deal

The viral post claiming BJP MLA Gopichand Padalkar gave a statement saying the semiconductors could have been stopped from going to Gujarat if MSRTC workers were provided with a merger is fake. Padalkar did not give this viral statement. 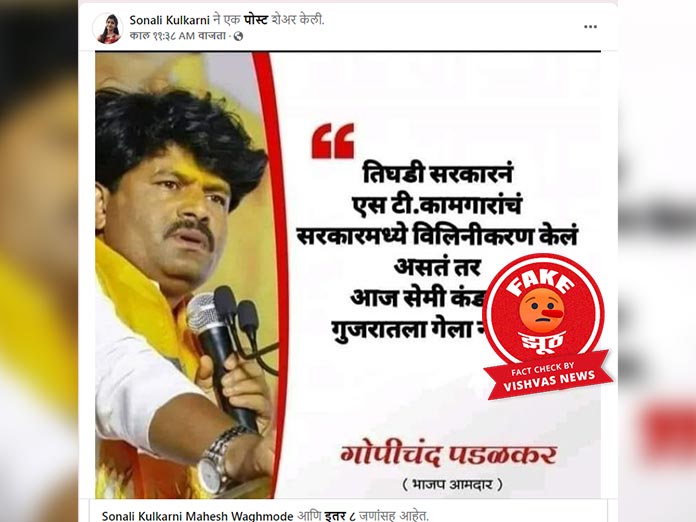 New Delhi (Vishvas News): With Maharashtra losing the mega Vedanta-Foxconn semiconductor plant deal to Gujarat, the Shinde-led government is at the receiving end of backlash for ‘letting go’ of a project that the previous MVA govt claims it had brought to the ‘final stage’. Amidst this controversy, Vishvas News came across a post being widely shared on various groups on Facebook which was attributed to BJP MLA and spokesperson Gopichand Padalkar. It was claimed in the post that he said if MVA government had merged the MSRTC workers then the semiconductor would not have gone to Gujarat.
Vishvas News in its investigation found the viral claim to be fake.

Translation: If MVA government had merged the MSRTC workers then the semiconductor would not have gone to Gujarat.

Vishvas News started its investigation by using Google Lens on the viral graphic. We copied the text on the graphic and started searching on Google if Gopichand Padalkar really made this statement.

We could not find any news regarding the same. However, we did find certain news items about the recent statement of Gopichand Padalkar.

He had recently said that Pawar will have to flee like the leaders of Sri Lanka.

The news was from a week ago.

We then used Facebook as search engine and searched the viral graphic using keywords from the news found online.

Using this as clue we searched again on Facebook and finally came across the original graphic.

In the last step of investigation, Vishvas News connected with personal assistant of Gopichand Padalkar, Sujit Pawar, who informed that the viral claim is fake. Gopichand Padalkar did not give viral statement on the recent Vedanta-Foxconn semiconductor plant deal.

In the last step of investigation Vishvas News did a social background check of the user who shared the post. Sonali Kulkarni is a resident of Pune and is followed by 321 people on Facebook.

Conclusion: The viral post claiming BJP MLA Gopichand Padalkar gave a statement saying the semiconductors could have been stopped from going to Gujarat if MSRTC workers were provided with a merger is fake. Padalkar did not give this viral statement.