Fact Check: Eknath Shinde did not give this statement against BJP, viral claim is fake

Maha CM, Eknath Shinde did not give viral statement regarding inferior treatment given to him and workers by BJP. Viral claim is fake. 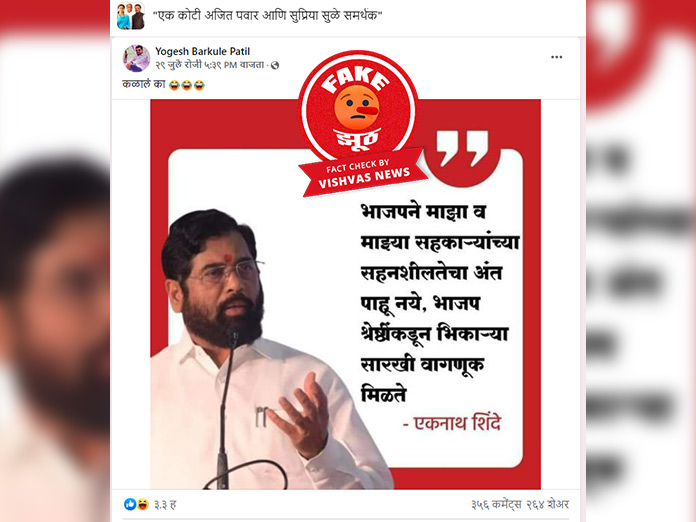 New Delhi (Vishvas News): Vishvas came across a post being widely shared on social media profiles, attributed to Eknath Shinde. In the post it was mentioned that Eknath Shinde had said that BJP should not test my and the workers patience. The seniors in the party are treating us like beggars.
In its investigation, Vishvas News found the viral post to be fake. Maharashtra CM Eknath Shinde did not give this viral statement.

Translation: BJP should not test my and my workers patience. BJP seniors are treating us as beggars.
-Eknath Shinde

We did not find news reports that had the viral content.

We checked if Eknath Shinde spoke about his coalition or the BJP recently.

We found a report on Times of India on July 31, 2022 titled: Issue of sharing Maharashtra CM’s post with BJP could have been resolved through talks in 2019: Eknath Shinde.

It was hence clear that Eknath Shinde did not give any statement.

We then checked from where the graphic must have been picked.

We did a google reverse image search and found the image being used on Deccan Herald, which was an IANS photo. The news was titled: ‘Never demanded Chief Minister’s post’, says Eknath Shinde

To check the graphic, we did a relevant keyword search on Facebook and found the original graphic shared on the verified page of ‘Sarkarnama‘, which is being followed by 5.9 lakh people.

Translation: Governor is a big post. It is a constitutional post and it must be taken care of that nobody should be insulted. We do not agree with the Governor’s statement

This was in regards with the recent controversy, where Governor of Maharashtra Bhagat Singh Koshyari, said at an event that ‘if Rajasthani and Gujarati communities were taken out of Mumbai it would not remain the financial capital of the country’.

In the next step of investigation, we contacted media coordinator of Maha CM Eknath Shinde, Viraj Muley and shared the viral content with him through WhatsApp. He told us that Eknath Shinde had not given this viraln statement. Viral claims are false.

Next we spoke to BJP spokesperson, Shivrai Kulkarni over phone regarding the same. He said, “Eknath Shinde has not given such a statement. This is definitely fake.”

In the next step Vishvas News spoke to ANI correspondent Saurabh Joshi, who has been covering Maharashtra politics. He too said that Eknath Shinde did not give this viral statement, viral post is fake.

In the last step we did a social background check of the user who shared the viral post. Yogesh Barkule Patil belongs to social media cell of NCP and lives in Partur. The group where it was shared, “एक कोटी अजित पवार आणि सुप्रिया सुळे समर्थक” has 3.8 lakh members.

Conclusion: Maha CM, Eknath Shinde did not give viral statement regarding inferior treatment given to him and workers by BJP. Viral claim is fake.