The clash between former Congress MLA Asif Mohammad Khan and a Delhi Police constable over the MCD election campaign is going viral on social media with fake claims. Khan’s supporters raised slogans of ‘Asif Khan Zindabad’, which was misconstrued on social media as ‘Pakistan Zindabad’. 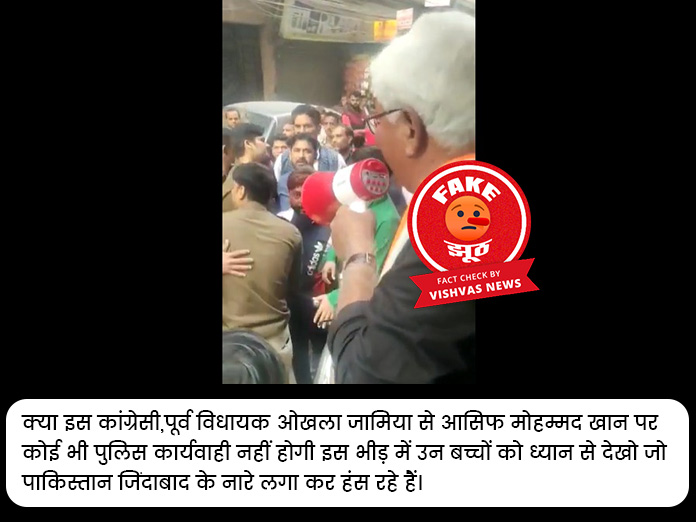 Former Congress MLA Asif Mohammad Khan was recently arrested on charges of threatening and manhandling the police. Now, a video clip of his speech is going viral on social media, claiming that while he was campaigning for the MCD elections without permission in the Shaheen Bagh area, his supporters raised slogans of ‘Pakistan Zindabad’.

Vishvas News, in its investigation, found the claim to be false. In the viral video, slogans of ‘Aasif Khan Zindabad’ were raised, not ‘Pakistan Zindabad’.

Social media user ‘Jitendra Hindu nationalist’ shared the viral video (archive link) and wrote, “Are our law, High Court, Supreme Court, Home Ministry all impotent? This policeman is in the country’s capital, Delhi. kind of inhuman treatment done, are we in Pakistan????

Will no police action be taken against this Congressman, former MLA from Okhla Jamia, Asif Mohammad Khan? Look carefully at the children in this crowd who are laughing by raising slogans of Pakistan Zindabad… do these children grow up and do any work in the interest of India? Will it happen?????? This condition will happen in the whole country after some time.. Wake up the sleeping citizens of the country… Please, everyone, share.”

Several other users on different social media platforms have shared the same video with similar claims.

As per reports, former Congress MLA Asif Mohammad Khan was arrested after misbehaving with the police when he was asked about holding a meeting (MCD election campaign) without permission from the State Election Commission in Delhi. Reports suggest that Asif Mohammad Khan was addressing around 20-30 people in front of Tayyab Masjid when Sub Inspector Akshay K Khan questioned him about meeting permissions. Listening to the sub-inspector’s questions, he got enraged and resorted to indecency amidst the crowd.

As per the news agency ANI – Delhi Police saw a congregation while patrolling near Tayyab Masjid, where Asif Mohammad Khan was addressing his supporters through a loudspeaker.

When asked about the Election Commission’s approval for the gathering, Asif Khan became aggressive and started abusing the official. Soon a case was registered at Shaheen Bagh police station, and an investigation was undertaken, after which he was arrested.

The image used in ANI’s tweet matches the screenshot of the viral video, which can be seen in the collage.

We could not find any mention of the ‘Pakistan Zindabad’ slogan being raised during this meeting in any news reports.

Next, Vishvas News contacted sub-Inspector Akshay Dagar, posted at Shaheen Bagh Police Station, who was present during the scene and was manhandled.

Refuting the claim that ‘Pakistan Zindabad’ slogans were raised, he said that in his presence, people raised slogans of ‘Asif Khan Zindabad’.

On social scanning, we found that the user has a following of over a thousand people on Facebook, and a particular ideology inspires his profile.

Conclusion: The clash between former Congress MLA Asif Mohammad Khan and a Delhi Police constable over the MCD election campaign is going viral on social media with fake claims. Khan’s supporters raised slogans of ‘Asif Khan Zindabad’, which was misconstrued on social media as ‘Pakistan Zindabad’.