Fact Check: Japan did not drop the vax rollout, viral claims are fake 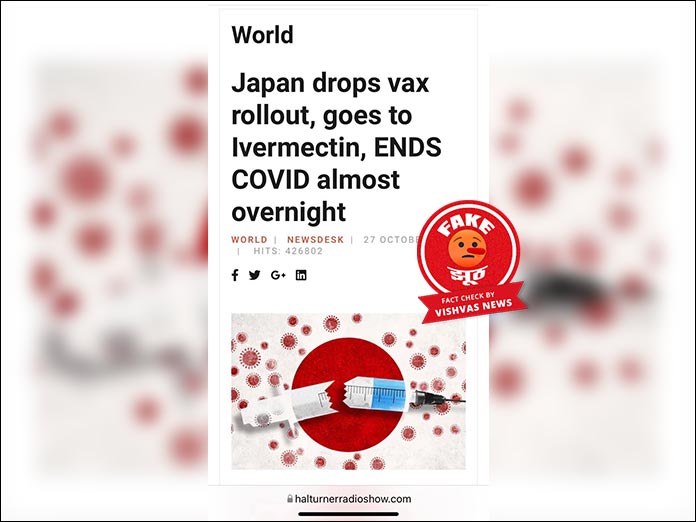 Vishvas News (New Delhi): Vishvas News came across a post on various social media platfoms that looked like a screenshot of an article. The article claimed, “Japan drops vax rollout, goes to Ivermectin, ENDS COVID almost overnight”. Vishvas News in its investigation found the claim to be false.

Vishvas News started its investigation by observing the viral post. The ‘article’ was published over ‘halturnerradioshow.com’ on 27 October 2021.

We checked the internet for credible news however, no news organisation had carried this news.

According to the Japanese government website, “The Government recommends that people get vaccinated because the benefits of vaccination are greater than the risk of side reactions.“

We did not find the drug ‘ivermectin‘ on Japan’s Pharmaceuticals and Medical Devices Agency.

In the last step of investigation, Vishvas News interacted with, first India-born Asian-origin assemblyman in Japan, Yogendra Puranik. He said, “Japan is focusing on vaccine passport digitalisation, agreements with more countries for accepting the Japanese vaccine passports and also declared to start the vaccination for kids between age 5 to 11 from Feb 2022. Japan has not stopped the use of vaccines.”

We did a social background check of the Facebook user, ‘Wayne Kennedy’, he lives in Alabama City.