Viral claims surrounding Hollywood star Morgan Freeman’s acceptance of Islam is fake; the actor did kickstart the 2022 FIFA World Cup ceremony with the recital of verses from the Quran, but he did not accept the religion. 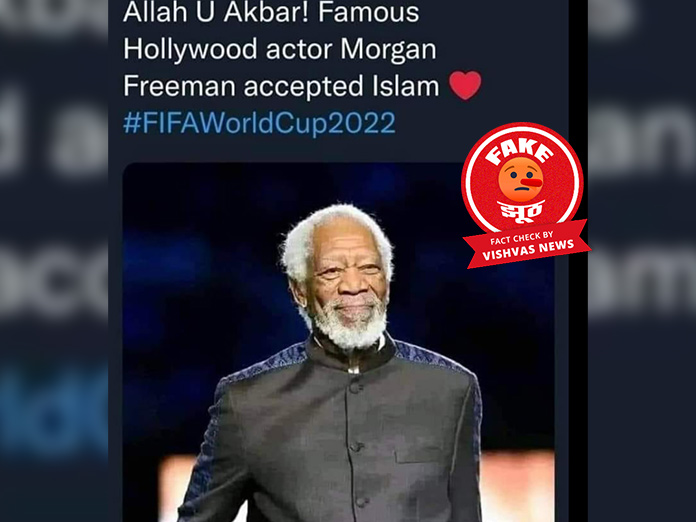 New Delhi (Vishvas News): American actor Morgan Freeman is a renowned Hollywood personality worldwide. On November 20, he was part of the grand opening ceremony of the 2022 FIFA World Cup in Qatar. During the ceremony, he quoted some verses from the Quran; however, soon after, many viral posts claimed that Freeman converted to Islam during the event.

Vishvas News, in its investigation, found the claim to be fake as Morgan Freeman did join motivational speaker Ghanem Al-Moftah on stage and shared a moment of reflection on the division in the world and how Islam’s message is a message of unity and understanding, but, he did not accept the religion on the global platform or anywhere else.

Vishvas News first did a keyword search on Google and found many similar claims. However, on performing Google Reverse Image via the INVID tool, we identified many news links like this, which discussed Ghanim Al Muftah and Morgan Freeman’s dialogue at the FIFA World Cup opening ceremony.

As per the news reports, during the ceremony, Morgan Freeman was joined on stage by the 22-year-old Qatari disability activist and motivational speaker Ghanim Al Muftah. Together, they opened the ceremony with an exchange about unity, tolerance, and respect that included reciting a verse from the Quran. This is the first time a verse from the Quran opens the FIFA World Cup.

In his iconic deep voice, Freeman narrated the lines: “We gather here as one big tribe, and Earth is the tent we all live in.”

Vishvas News also found his opening deliveries on Islam Channel that gives credit to FIFA. Still, nowhere we found any news reports that talked about his conversion to Islam during the ceremony or after.

This is not the first time Freeman has been subject to fake news regarding his religious beliefs.

Hence, to confirm, Vishvas News spoke to Vinit Ramakrishnan, News 18 Sports Editor, who confirmed, “This is fake. Freeman was present during the ceremony, that’s all.”

Another Sports journalist with Zee media Ankit Banerjee, covering FIFA at India.com, thwarted the rumours by saying, “This is wrong information. Reading a verse of the Quran surely doesn’t convert anyone to Islam.”

On social scanning, we found that the Facebook Page ‘Holy Qur’an a Complete Code of Life & Preparing for Hereafter’ is followed by approx. 11,000 followers. Its intro reads: “Belief in the Quran is a part of being righteous & pious. Brings ones life out of darkness into life.”

Conclusion: Viral claims surrounding Hollywood star Morgan Freeman’s acceptance of Islam is fake; the actor did kickstart the 2022 FIFA World Cup ceremony with the recital of verses from the Quran, but he did not accept the religion.