Rishi Sunak did not light diyas at Downing Street on Diwali. Two-year-old picture clicked in 2020 goes viral as recent. 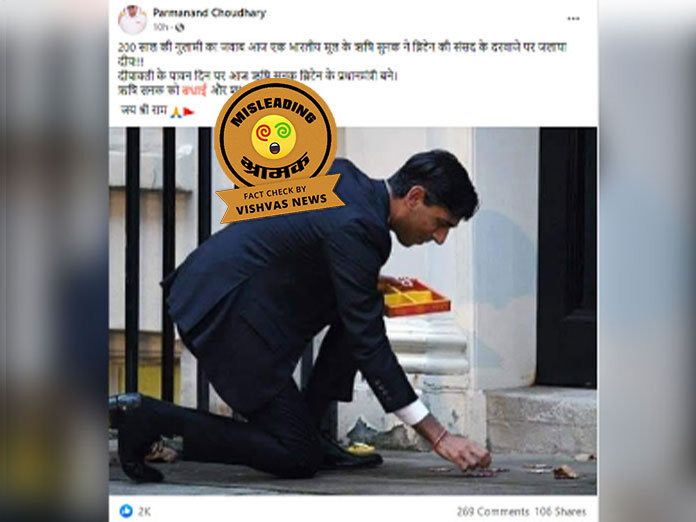 New Delhi (Vishvas News): After Indian-origin PM Rishi Sunak took charge as British PM, the users on social media platforms are sharing a picture of Rishi Sunak where he is seen lighting diyas, at 10 Downing Street.

Vishvas News in its investigation found the photo to be two-year old. Users are claiming that this is a recent picture.

Vishvas News started the investigation, with Google Reverse Image search. We found the image on Rediff.com, posted on 13 November 2020. This image was published in a news article. The article said, “The 40-year-old Indian-origin finance minister, who is married to Akshata Murthy — the daughter of Infosys co-founder Narayana Murthy — has spoken about being a ‘proud Hindu’ over the years.”

This picture was also found in a report by The Guardian. The news report said “The UK chancellor, Rishi Sunak, has urged fellow Hindus to “follow the rules” during Diwali as he lit small clay oil lamps on the doorstep of his official residence at 11 Downing Street to mark the beginning of the five-day festival of lights.”

For more details we connected with a reporter in London, Naomi Cantan. She said, “The viral image of newly appointed, Rishi Sunak is that of November 2020, when he was a chancellor. This is a picture from number 11, where the chancellor lives. Last night no lights were put up at the Downing street. Because, Sunak was not officially declared the prime minister.”

According to a report published on news.sky.com, Rishi Sunak is now declared as the British PM.

We scanned the Facebook profile of Parmanand Choudhary. Vishvas News found out that the profile was made in September 2011 and belongs to an ideology.

Conclusion: Rishi Sunak did not light diyas at Downing Street on Diwali. Two-year-old picture clicked in 2020 goes viral as recent.