Fact Check: Old video of Murugan Temple in Sivakasi shared as that of Ekambaranathar Temple, Kanchipuram

The 2018 viral video of a diamond studded ‘Shiva Linga’ is from Murugan temple in Sivakasi, Tamil Nadu. 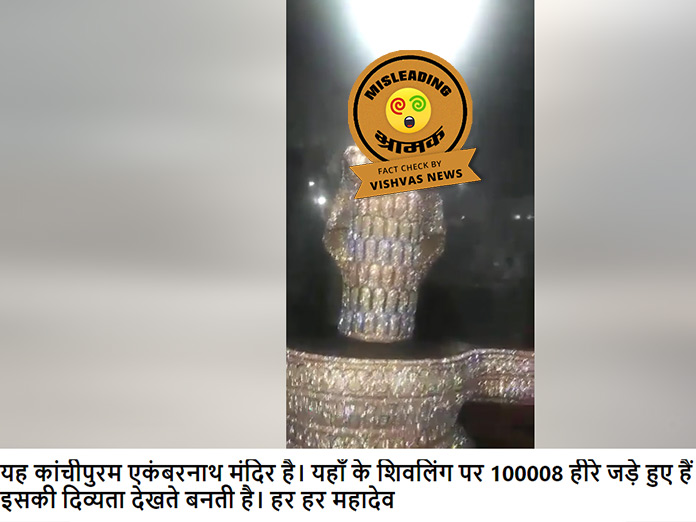 New Delhi (Vishvas News): A Facebook video, showing visuals of a diamond studded ‘Shiv Linga’, was circulated on social media on August 1, 2022. It was claimed that the viral video is from Ekambaranathar Temple located in the town of Kanchipuram in Tamil Nadu, India.

However, Vishvas News in its investigation found the claim to be misleading. The viral video is from 2018 and is from Murugan temple in Sivakasi, not Ekambaranathar temple in Kanchipuram.

Facebook group ‘Hindu 4 Hindustan’ posted the video of a diamond studded ‘Shiva Linga’ and claimed that it is from Ekambaranathar Temple in Kanchipuram, Tamil Nadu. His post read, “This is the Kanchipuram Ekambaranathar temple. 100008 diamonds are inlaid on the Shivling here. Its divinity is visible…Hail The Shiva!”

Vishvas News explored the fact checking InVID tool and searched the keyframes of the viral video using Google reverse image to know the truth. We found another post on Facebook that claimed the viral video to be from Ekambaranathar Temple in Kanchipuram.

However, on further investigation we found many similar videos from 2018 on Facebook and Youtube that claimed to be from Murugan temple in Sivakasi, also in Tamil Nadu. One of the posts, dated August 22, 2018, read, “Diamond Kavacham (Armour) for the Shiva Lingam during the Pradosham Day in the Lord Shree Murugan Temple at Sivakasi In Tamilnadu.”

We also found a YouTube link of ‘Sri Sri Rashasthali’, published on August 24, 2020, that showed similar visuals. The post read: “Om Namashivaya. Har Har Mahadev. Diamond Kavacham (Armour) For The Shiva Lingam During The Pradosham Day In The Lord Shree Murugan Temple At Sivakasi In Tamilnadu/India.”

The page has more than 132K subscribers on YouTube.

To investigate further, we got in touch with Deepa, news reporter from Hindu in Chennai, who said, “the video is from Murugan temple in Sivakasi”.

The Facebook page ‘Hindu 4 Hindustan’ is a ‘religious organisation’ and its description reads – ‘Join only those friends who want to see India as Hindu Rashtra’ – and has a little more than 120 followers.

Conclusion: The 2018 viral video of a diamond studded ‘Shiva Linga’ is from Murugan temple in Sivakasi, Tamil Nadu.