Viral post claiming coconut oil is used to prevent dengue is fake. Dr B Sukumar too refuted the claim. 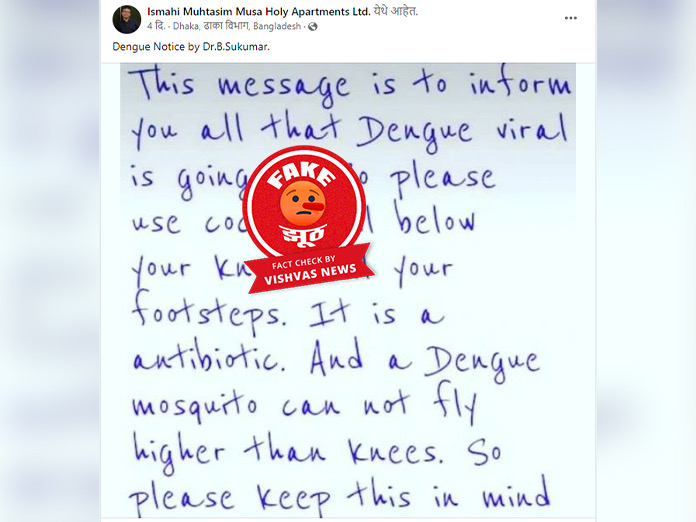 New Delhi (Vishvas News): Vishvas News received a claim on its WhatsApp chatbot, +91 95992 99372. The claim stated that one Dr B sukumar from Sri Saisudha Hospital in Tirupati has claimed that Dengue can be cured by using coconut oil below knees. Vishvas News found the viral claim to be false. Earlier too, Vishvas News had worked on the same claim and found it to be fake.

Facebook user Ismahi Muhtasim Musa posted in the group Holy Apartments Ltd, the image stating, ‘This message is to inform you all that Dengue viral is going on. So please use coconut oil below your knees till your footsteps. It is a antibiotic. And a Dengue mosquito can not fly higher than knees. So please keep this in mind.’

The user attributed this claim to Dr B Sukumar.

Vishvas News started its investigation by connecting with Dr B Sukumar from Sri Saisudha Hospital in Tirupati. Dr B Sukumar said, “The viral message is fake. This message is going viral on the social networking sites since last 8 years. I have never preescribed coconut oil for dengue.“

We then checked the CDC website. To avoid Dengue, the website suggested the following:
Use insect repellent, wear long-sleeved shirts and long pants, and control mosquitoes inside and outside your home.

We also checked the World Health Organisation, WHO website. For treatment of Dengue and severe dengue, the website mentioned, “There are no specific vaccines or antiviral treatments against dengue fever. Use of paracetamol to bring down the fever is indicated. Aspirin and related non-steroidal anti-inflammatory drugs (NSAIs) such as ibuprofen should be avoided. “

In the next step of investigation we connected with Dr Sajal Bansal. He informed us, “Dengue is a mosquito born disease and that it can be prevented only by preventing the mosquito bite. There are no other preventive measures.”

Earlier too Vishvas News did a fact check on the same claim. Check the fact check here.

In the last step of investigation we did a social background check of the user who shared the viral post. We found that Ismahi Muhtasim Musa is a resident of Dhaka, Bangladesh. He joined Facebook in August 2011.

Conclusion: Viral post claiming coconut oil is used to prevent dengue is fake. Dr B Sukumar too refuted the claim.