Fact Check: Ayodhya Ram Mandir not to be inaugurated on 1st January, 2023, viral claims are false

Ram Mandir will not be inaugurated on 1st January, 2023. But scheduled for 2024. Viral claims are false. 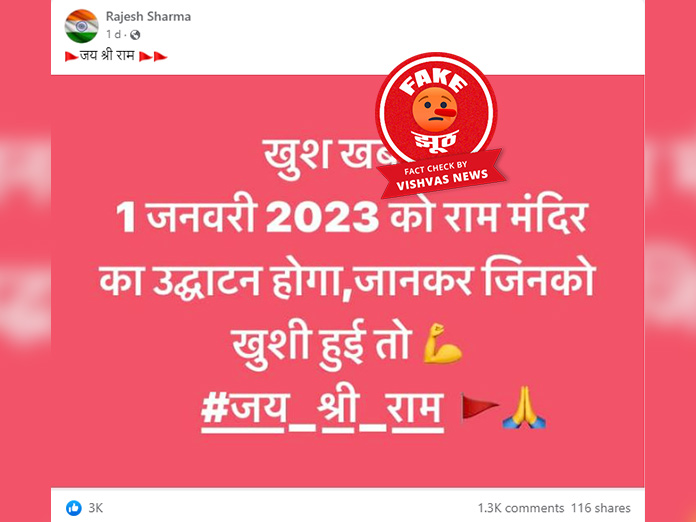 New Delhi (Vishvas News): Vishvas News came across a post being widely circulated on social media platforms. The post stated that the Ram Mandir will be inaugurated on 1st January, 2023. Vishvas News conducted a fact check on the claim and found out that Ayodhya’s Ram temple would be inaugurated in 2024.

Translation: “Good news, Ram Mandir to be inaugurated on 1 January 2023. Those who are happy reading this, #Jai_Shri_Ram”

Vishvas News started its investigation into the claim with Google search.

We also found a report on Hindustan Times website: Ram temple trust pulls out all stops to meet Jan 2024 deadline

The report said: The Trust has revved up work at the five workshops to ensure the opening of the Ram temple between December 2023 and January 15, 2024

A Times of India report also mentioned the temple to be open to the public by January 2024.

In the next step of our investigation we contacted the helpline number given on the website of ‘Shri Ram Janmbhoomi Teerth Kshetra’. The person informed us that the temple will be inaugurated on the auspicious day of Makar Sankranti in January 2024, which is considered auspicious.

Vishvas News also reached out to Dainik Jagran’s Ayodhya correspondent, Ram Sharan who informed us that the Ram temple will not be open to the public on 1 January, 2023. The viral claims are fake.

In the next step, Vishvas News also reached out to one of the trustees of Shri Ram Janmbhoomi Teerth Kshetra, Dr Anil Mishra. In conversation with Vishvas News, Dr Mishra said, “Ram temple will not be inaugurated on 1st January, 2023. The viral post is fake. After the trust selects an auspicious day after 14th January, 2024, the idol of Shri Ram will be installed.”

In the last step of the investigation Vishvas News conducted a social background check of the person who shared the claim. Rajesh Sharma is a partner at Nylowear India.

Conclusion: Ram Mandir will not be inaugurated on 1st January, 2023. But scheduled for 2024. Viral claims are false.