Coin seen in the viral video is actually an artistic creation by Russian coin maker, viral claims are false. 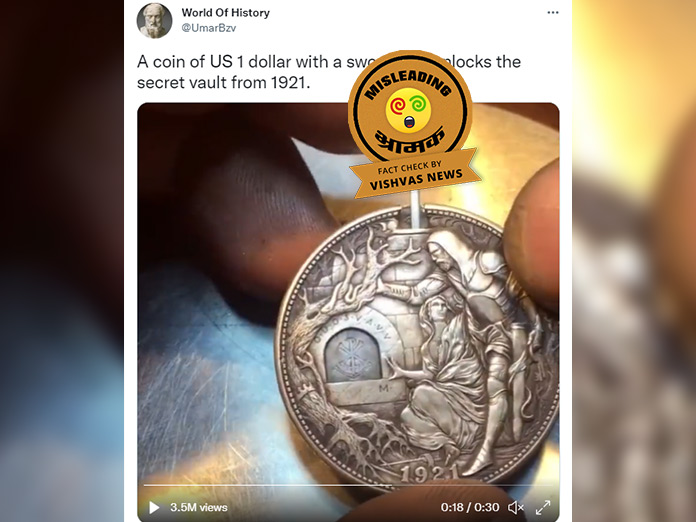 New Delhi (Vishvas News): Vishvas News came across a viral video on social networking websites. A coin could be seen in the videos and a sword carved on the same coin is seen being used to open a vault on the same. It is being said that this is a US coin from 1921.
Vishvas News in its investigation found the viral claim to be false. This coin seen in the viral video is a creation of Russian coin maker Roman Booteen.

Twitter user, World Of History shared the viral video on his profile and wrote: A coin of US 1 dollar with a sword that unlocks the secret vault from 1921.

We also found the claim being widely shared on Facebook.

Vishvas News started its investigation by checking the comments on the viral video. Many claimed that this was a creation of a Russian coin maker Roman Booteen.

With that clue we searched over Google with keywords, ‘Russian Coin maker’
This led to the coin maker’s website.

This artist has coins for sale too.

We also found various videos on YouTube, that showcase coins made by Roman Booteen.

The viral coin too is featured in the video found by Vishvas News.

We found the Instagram link too of verified handle of ‘Roman Booteen’, where the exact same video was uploaded.

In the next step of Vishvas News we connected with Roman Booteen through Instagram Messenger and asked about the viral claim. He told us that the coin in the viral video is Morgan Dollar Coin from 1921, refaced by him. He created the mechanism in such a way that the sword carved on the coin opens a vault. Roman also shared a video with us, which was making of the coin.

In the last step of investigation we did a social background check of the person who shared the viral video. Twitter user ‘World of History’, has 155.9K followers and joined Twitter on April 2022.

Conclusion: Coin seen in the viral video is actually an artistic creation by Russian coin maker, viral claims are false.