Fact Check: This is not a real mermaid; scene from a short film viral with fake claim

This claim turned out to be false in the investigation of Vishvas News. The video going viral is actually part of a short film. 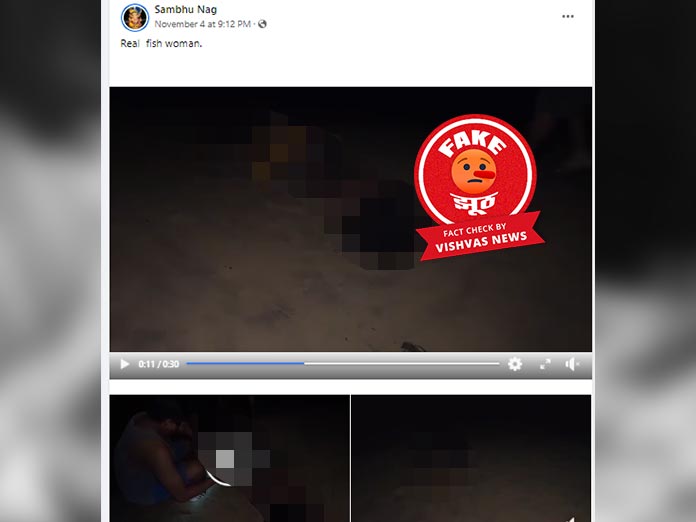 New Delhi (Vishvas News). A video is going viral on social media in which a woman, who looks like a fish, can be seen. It is being claimed with the post that this is a real mermaid found on a beach in Sri Lanka. This claim turned out to be false in the investigation of Vishvas News. The video going viral is actually a scene from a short film.

To check the truth of this post, Vishvas News searched the keyframes of this video on Google reverse image. We found a long video of these viral clips uploaded on a YouTube channel called Trip Pisso in June 2021. According to the description written with the video, it was a film which was made as an awareness video about the safety of sea creatures. The cast and crew credits were also written at the end of the film. An actress named Gayathri Jayamanna played the mermaid in the film. Uday Hawagama is the director of the film.

We contacted Trip Pisso via mail about this. A phone number was shared with us in response. We had a conversation with Hashan Madushka on this phone number. He told us “This is a scene from an awareness film. This film was made to create sympathy and awareness among the public about the sea and marine life. Marine life is harmed a lot due to oil spills and chemical spills in the ocean. Through this film, an attempt was made to make people aware of this subject. This film has been directed by Uday Hawagama.”

He also shared with us a video where the making of the mermaid was shown. In this video, one could easily see how this mermaid was made with the help of makeup. You can watch the video here.  Hashan Madushka is the man who can be seen wearing a maroon t-shirt in the clip.

Conclusion: This claim turned out to be false in the investigation of Vishvas News. The video going viral is actually part of a short film.