Fact Check: This photo of naked people demonstrating on road has nothing to do with Karnataka

Conclusion: The claim turned out to be false in Vishvas News’s investigation. The image is from an old incident in Greater Noida. 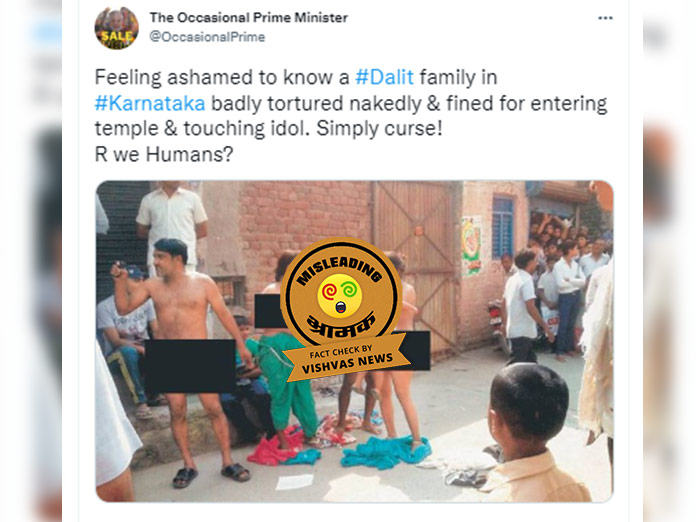 New Delhi (Vishvas News). Days after a Dalit boy was allegedly thrashed for touching the idol at a religious procession in Karnataka’s Kolar district, on September 8, and his family fined, a picture of a few naked demonstrators is going viral on social media with claim that the family was tortured and humiliated.

The claim has proved to be false in a Vishvas News investigation. The viral picture circulated to support the claim is not recent. The incident it captured occured in Greater Noida, UP on October 7, 2015. However, there are reports to confirm that a boy was indeed badly beaten for touching a religious idol in Karnataka and his family fined by the local panchayat. However, there are no reports to confirm that the family was publicly stripped and humiliated.

Vishvas News first searched the viral image using Google reverse image search. We found the viral picture on many web pages. We also found this photo in a story dated October 10, 2015 published on India Today website. According to the news item, the incident is from Dankaur Police Station in Greater Noida. “A National Commission for Scheduled Castes team on Friday visited the Dankaur area in Uttar Pradesh’s Gautam Budh Nagar and met the Dalits, who were arrested on charges of public obscenity. Five people, including three women, were arrested on Thursday after they allegedly stripped in a market in Dankaur in Gautam Budh Nagar, to protest the police’s alleged refusal to register a complaint of robbery.” The report said.

We also found another news report on the incident on jagran.com. According to the report, “Dalit family had stripped naked in Dankaur on Wednesday due to police inaction in a robbery case. The victim’s family had accused the police of registering a case of robbery and not arresting the accused. In the high-voltage drama in the town, the police had filed a report accusing the Dalit family of robbing a pistol and committing a deadly attack. The people of the town have also filed a case accusing the family of obscenity. The police sent five members of the family, including three women, to jail.”

We also found a video on Youtube regarding the 2015 incident. This video was uploaded on the Youtube channel of India Today on October 9, 2015. The video was of the same incident in Dankaur. It was reported that on October 7, Dalits had demonstrated naked in front of the Dankaur police station. After this they were arrested.

To know the veracity of the viral post, we contacted Dainik Jagran’s Noida reporter Arpit Tripathi. He told us “This picture is from the incident in Greater Noida in October 2015. These people had removed their clothes themselves.”

Meanwhile, a case of the panchayat imposing a fine of Rs 60,000 on a Dalit family after a member allegedly touched the idol of a Hindu God in Kolar district of Karnataka came to light. The accused had also allegedly thrashed the Dalit boy for touching the idol taken out during the procession. But even after searching, we could not find any news report on the incident of stripping of this family anywhere. Read the full news on this matter here.

Finally, we did a social scanning of the Twitter page The Occasional Prime Minister. This page was created in May 2021.

Conclusion: Conclusion: The claim turned out to be false in Vishvas News’s investigation. The image is from an old incident in Greater Noida.