The video going viral as CCTV footage from Andheri of a hat man killer on lose, killing women in Mumbai, is a promotional gimmick for upcoming movie Maarrich. Viral claims are false. 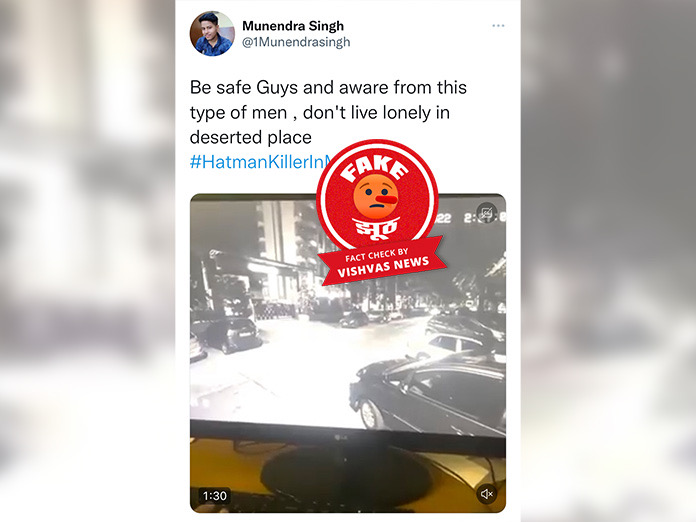 New Delhi (Vishvas News): Vishvas News came across a video, which looked like a CCTV footage being shared on various social media platforms. It was being claimed that this CCTV footage is that of a hat man killer on the loose in Mumbai, who is killing women. The video was claimed to be from Andheri. Vishvas News in its investigation found that the video is a part of promotion of Tusshar Kapoor’s upcoming movie Maarrich. Viral claims are false.

We found out that there was a watermark at the bottom of the video that said, ‘MAARRICH’.

We then searched for Maarrich on the internet.

We found out that the movie Maarrich is set for theatrical release on 9th December 2022. We found a few reports too surrounding the same.

In the next step of investigation, Vishvas News did a keyword search on Twitter, and searched for tweets about Hatman killer. We found a tweet shared on the verified Twitter handle of Mumbai Police.
The Tweet said: #Debunked :
A widely circulated video given the title ‘Hatman Killer in Mumbai’ shows CCTV footage of the stabbing of a woman in Andheri.
We have confirmed that the clip is completely fake & request all to not share it for it furthers chaos and panic.

We then checked for the news reports about the same.

We found a report on FirstPost titled: The Hatman killer video in Mumbai turns out to be a promotional campaign for the upcoming film Maarrich

We also found a report on Times Now. The report was titled: There is no ‘Hatman Killer’ in Mumbai; police call the viral CCTV video ‘completely fake’

In the next step of investigation we contacted, senior Bollywood journalist, Parag Chhapekar, he informed us that the viral video is from an upcoming movie and that sharing a sensitive video like this would have been a promotional gimmick of the fil makers. He also opined that it is always advised to read a fact check before trusting such videos.

In the last step of investigation we did a social background check of the Twitter user who shared this video. We found out that Munendra Singh is a content writer by profession and joined Twitter in September 2020.

Conclusion: The video going viral as CCTV footage from Andheri of a hat man killer on lose, killing women in Mumbai, is a promotional gimmick for upcoming movie Maarrich. Viral claims are false.