Vishvas News in its investigation found that the viral link attributed to FIFA is fake. Users should not click on such links. 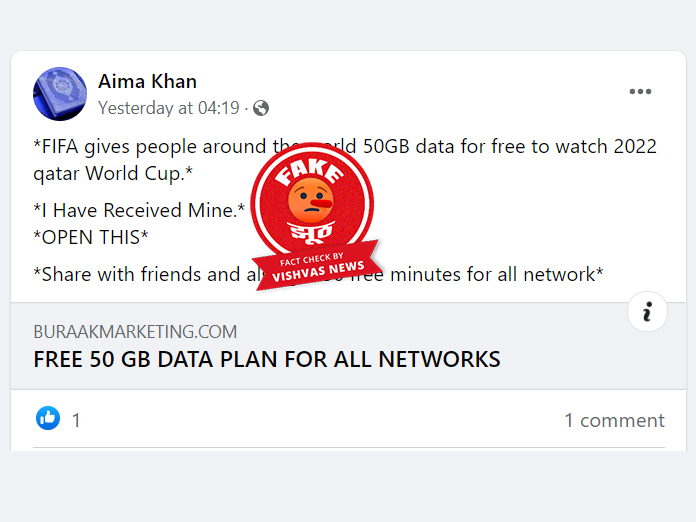 New Delhi (Vishvas News): A post being shared on social media claims that FIFA is giving free 50GB data to watch World Cup football matches. Along with the post, a link is also being shared. Vishvas News investigated the claim and found that the viral post is a scam. The suspicious link is prompting readers to enter their personal details. Readers are advised not to click on any such link, it is a fraudulent post.

Facebook user Aima Khan shared this post on November 23. Caption reads, “FIFA gives people around the world 50GB data for free to watch 2022 qatar World Cup. I Have Received Mine. OPEN THIS.Share with friends and also get 50 free minutes for all network”

This is not the first time that such kind of scam link is going viral on social media. Such claims have gone viral before as well. Vishvas News has investigated such posts from time to time. Such links are created to cheat and collect readers personal information like phone number, e-mail id and other information. Vishvas News would like to tell readers that they should not click on any such links, if there is no antivirus in their devices.

For more information we contacted cyber expert Anuj Aggarwal. We shared the viral link with him. He said, ‘These types of links are created to collect data. Such links should not be clicked on.’

We also spoke to Ayush Bhardwaj, cyber security expert and former IT advisor to the Public Grievances Committee, Government of Rajasthan, for more details on the subject. He said that this post is made for the purpose of getting a clickbait. As soon as someone clicks on this link, traffic is generated from it and money is received. The link is completely fake. Its purpose is to earn money only by generating traffic.

This post was shared on Facebook by a user named Aima Khank. According to the profile, the user lives in Islamabad.

Conclusion: Vishvas News in its investigation found that the viral link attributed to FIFA is fake. Users should not click on such links.