Viral video going viral claiming to be of Maharashtra CM Eknath Shinde is that of Kavathe Piran sarpanch, Bhimrao Mane. 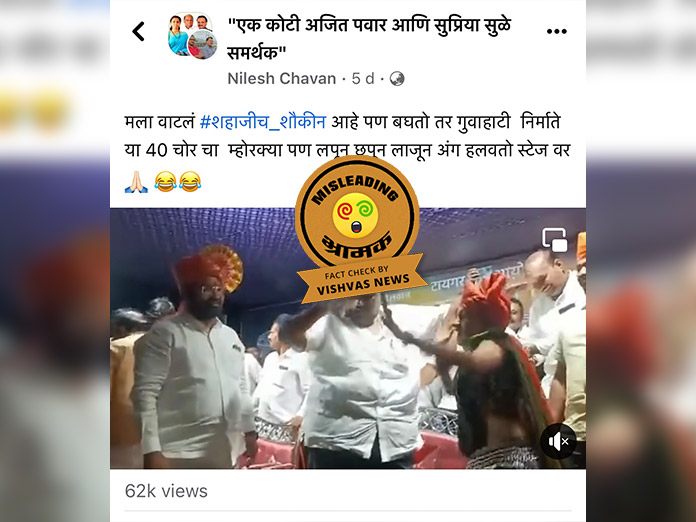 Vishvas News (New Delhi): Vishvas News came across a video on social networking websites. The video looked like that of an event and a lot people could be seen on stage with a few girls dancing. People are claiming that it is the current Maharashtra chief minister in the video, however, Vishvas News found out that the person in the viral video is Kavathe Piran sarpanch, Bhimrao Mane.

Translation: I thought it was just Shahaji who was interested in such things but the person who lead 40 people in Guwahati too is interested to dance.

After a few seconds, Vishvas News was able to spot ‘टायगर ग्रुप आयोजित‘ written on the banner behind the stage. It was now evident that the event was organised by one Tiger group in Maharashtra.

We searched with relevant keywords and were able to spot ‘Tiger group’ active in Maharashtra.

Using Facebook as the search engine, we were able to connect with Aaquib from Tiger Group Maharashtra. This is an active social organisation in Maharashtra run by Tanaji Jadhav.

Vishvas News shared the video with Aaquib on WhatsApp. He informed us that there were no such events conducted by the group where they had called Maharashtra CM.

Aaquib however, connected with a volunteer in Sangli who confirmed that the video is from an event organised by another Tiger group which operates from Sangli. The event was organised in Kavathe Piran.

Vishvas News then searched with relevant keywords and looked for anything on internet related to Kavathe Piran. We were able to spot a poster on Instagram which had contact details of its members from the group.

We connected with Rahul Patil of the group. Vishvas News shared the viral video with him. He informed that the video was taken on 15th September when Tiger group organised a ‘Rassi Khech‘ (rope pulling) competition in Kavathe Piran. The competition also had a special attraction, ‘Gauri Punekar dance show’. The person, he informed in the viral video is the sarpanch of the village, Bhimaro Mane, who is also nephew of Hindakesari Maruti Mane.
Patil informed that since it was a public event, many people had recorded it and it was possible that the video found its way on social media.

The above details were also confirmed by another volunteer of Tiger group, Vishal Shinde.

Vishvas News also connected with Viraj Muley at CM office, who denied of Eknath Shinde visiting any such event.

Though Vishvas News couldn’t find out the original video, we were able to find out that the person in the viral video is not Maharashtra CM Eknath Shinde but Bhimrao Mane.

In the last step of investigation we did a social background check of the user who shared the video. We found out that Nilesh Chavan is a resident of Pune, Maharashtra.