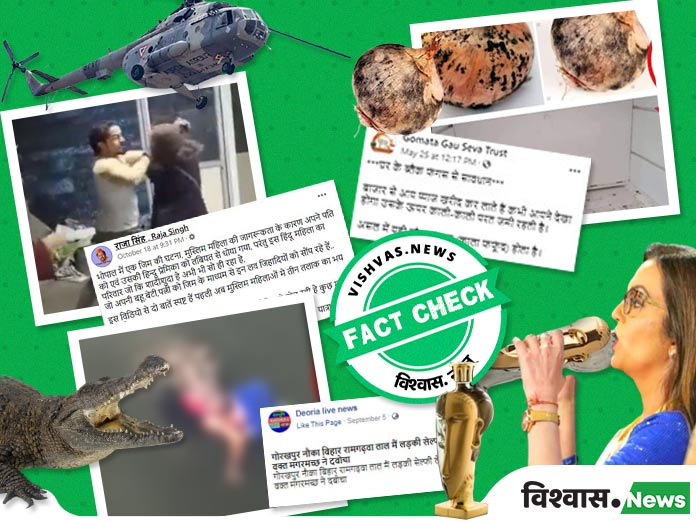 New Delhi (Vishvas News): Many people might have spent most of 2020-21 working from their homes but that didn’t stop falsehoods to spread on chat groups, social media, or even through word of mouth. Vishvas News published 3,137 fact checks in 2021 from January to December, which makes up 39.5 % of our total fact-checked articles since August 2018, which is 7,938.

More fake claims were fact-checked this year because, in Vishvas News, we ramped up our fact-checking efforts and increased the number of articles we published, not only to strike-off potentially harmful misinformation, but also to carry out our researches on disinformation. Fake news purveyors were at full throttle in 2021 in their production of inaccurate posts related to Covid-19 or related to other trending information.

The fact checks that Vishvas News published about COVID-19 misinformation, hoaxes, vaccines etc. made up 40% of the total fact checks followed by fact checks related to manipulated images and videos related to trending events including personalities (forged and edited posts), politics, science that accounted for 40% and the remaining 20% were related to fake quotes (10%), public officials (5%), business-related, others, etc (5%).

The study, ‘Prevalence and Source Analysis of Covid-19 Misinformation in 138 Countries’ published in Sage’s International Federation of Library Associations and Institutions journal analysed 9,657 pieces of misinformation that originated in 138 countries. “Of all the countries, India (18.07 per cent) produced the largest amount of social media misinformation, perhaps due to the country’s higher internet penetration rate, increasing social media consumption and users’ lack of internet literacy. Also, the results also showed that India (15.94 per cent), the US (9.74 per cent), Brazil (8.57 per cent) and Spain (8.03 per cent) are the four most misinformation-affected countries.”

The circulation of fake news is punishable under section 505 of the Indian Penal Code, which states: “Whoever makes, publishes or circulates any statement or report containing rumour or alarming news…shall be punished with imprisonment which may extend to three years, or with fine, or with both.”

We had gone through all 3,137 fact-checked articles we published from January to December that were parallelly labeled as soon as they were published according to the topics they covered.

Here are some of the trends in misinformation in 2021 as analyzed by Vishvas News:

The black mold found on onions and the one that forms in the refrigerators are different from mucormycosis causing black fungus. The viral post was fake.

2. A fake video that went viral showed a person claiming that coronavirus can be prevented by doing seven exercises.

Vishvas News investigated the viral post and found it to be fake. It was found that the person in the video was Dr. Manish Sharma, CMHO, Gwalior, Madhya Pradesh. A notice was also issued to him by the department for sharing such a misleading video.

3. A video of an IAF Mi-17 helicopter that crash-landed in eastern Arunachal Pradesh on November 18 was falsely shared as the crash that killed CDS General Bipin Rawat.

On December 8, 2021, the Indian Air Force tweeted that an IAF Mi-17V5 helicopter, with Chief of Defence Staff General Bipin Rawat on board, met with an accident near Coonoor, Tamil Nadu. IAF.

Soon after, a video started circulating online claiming that it is of the chopper crash that killed CDS General Bipin Rawat, his wife Madhulika Rawat and 11 others. Vishvas News investigated and found that the viral video was of an IAF Mi-17 helicopter that crash-landed in eastern Arunachal Pradesh on November 18. CDS Rawat, his wife and 11 others died in a chopper crash in Tamil Nadu on December 8.

4. A fake post went viral claiming nasal swabs taken as a sample to test for COVID-19 can be used to plant chips, and other viruses on the brain, and this would result in brain damage.

Vishvas News investigated and found the claim to be false. Nasopharyngeal swabs do not contain chips and do not implant the same that would affect the brain. The swabs are used to collect samples from the nasopharynx and aren’t used to plant anything in the brain.

5. A photo of Nita Ambani, the philanthropist and wife of Mukesh Ambaniwent went viral claiming that she drinks Acqua di Cristallo Tributo a Modigliani, the most expensive bottled water in the world. The photo showed Nita Ambani drinking water from a gold-like bottle. It was an edited photo.

An old photo of Nita Ambani was morphed to show a disposable plastic water bottle as Acqua di Cristallo Tributo a Modigliani, the most expensive bottled water in the world.

6. Video Of Crocodile Attack In Mexico Got Viral In The Name Of Gorakhpur

A video of an assault was shared with the false claim that it is a love jihad case.

With uncertainty still hovering this year amid the ongoing pandemic and other ongoing events, all of us must stay vigilant and should together put an effort to combat misinformation.