Conclusion – The video that claims to show the first train travel in 1809 is actually a clip from a silent movie named ‘Our Hospitality. The claim is FAKE. 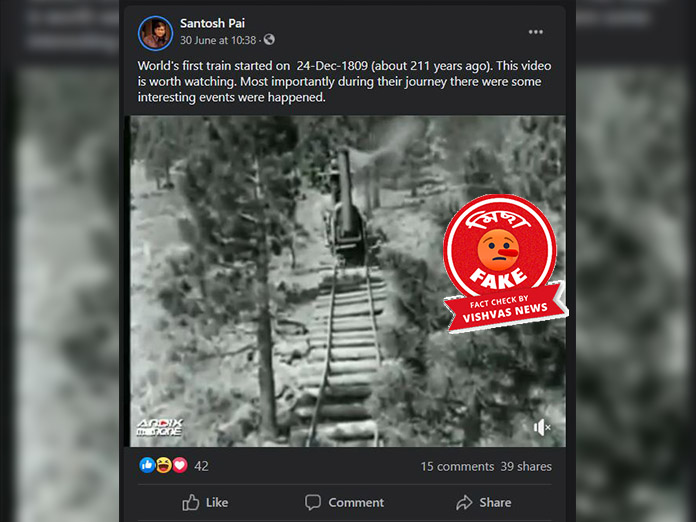 Vishvas News (New Delhi): Vishvas News came across a video being widely shared with the claim that the video is that of the world’s first train that was launched on 24 December 1809, about 211 years ago. The video shows a train moving across roughly laid tracks. Vishvas News found in its investigation that the claim is false.

Facebook user Santosh Pai shared a 3 min 1-sec clip on a Facebook Group Mind Your English on June 30 and wrote: World’s first train started on 24-Dec-1809 (about 211 years ago). This video is worth watching. Most importantly during their journey, there were some interesting events were happened.

Vishvas News first put the viral video on the InVID tool and took out its key-frames. We then reverse images searched these key-frames. It led us to a YouTube video. We found clippings viral in this video, in the movie ‘Our Hospitality’ by Buster Keaton, 1923 which is available on Youtube. The viral clip appears at the 15-minute timestamp of this movie.

Find details about the movie here.

To know more about the history of trains, we searched on the internet with keywords. We found that the first steam train was discovered in 1804. But the first operative steam train was opened only in 1825. So, the claim made here is completely void.

We contacted Siddhartha Sankar Deka, Senior Journalist at The Assam Tribune & Noted Film Critic regarding the matter. He told us, “I also got this video clip on WhatsApp and also on Facebook. Actually, it’s a part of a film only. I have seen the original film. This is a scene from Buster Keaton’s 1923 movie “Our Hospitality – A Metro Attraction”. The claim going viral is fake.”

At the last part of our investigation, Vishvas News scanned the profile of Facebook user Santosh Pai. The user has 217 friends. The user is a resident of Fullerton, California and from Baroda, Gujarat, India.

Conclusion: Conclusion – The video that claims to show the first train travel in 1809 is actually a clip from a silent movie named ‘Our Hospitality. The claim is FAKE.