Fact Check: This Cruise Ship Video Is Not From Gujarat, Viral claim is misleading 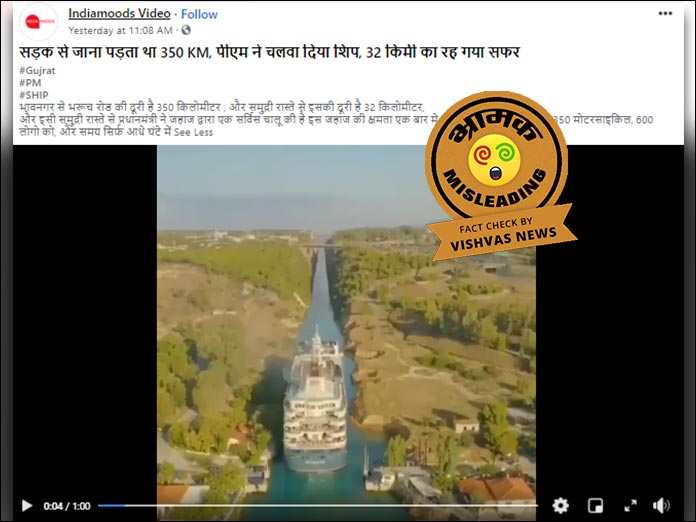 New Delhi (Vishvas News). A video of a large cruise ship coming out from middle of a narrow canal is viral on social media with a description that it is of a cruise service between Bhavnagar to Bharuch in Gujarat.

Vishvas News investigation revealed that this video is actually from Greece. Although one such cruise service was started in Gujarat in 2017, this service was discontinued.

In the viral video, a large cruise ship can be seen moving out from middle of a narrow canal into a sea. The description reads, “The distance from Bhavnagar to Bharuch Road is 350 kilometers and its distance from the sea route is 32 kilometers and by this sea route the Prime Minister has started a service by the ship… ”

We first extracted the keyframes with the InVID tool and searched it on the Internet using Google reverse image search tool. On the very first page, we found a link to www.dailymail.co.uk that had videos and pictures of this cruise ship. According to the news, it is cruise ship MS Braemar, weighing 24,344 tonnes. It is owned by Fred Olsen Cruise Lines, a shipping company in the United Kingdom. This video is from 2019 when this ship crossed the Corinth Canal.

We also found this video on the official YouTube channel of Fred Olsen Cruise Lines.

The viral post claimed this video is from Gujarat.  We found out whether any such service is operational between Bhavnagar to Bharuch. We found that a ship service named “Ro Ro Ferry” was inaugurated in Gujarat in October 2017. It operated from Ghogha Port in Bhavnagar to Dahej Port in Bharuch. The roadway distance between the two places is about 350 kilometers, but the sea route is just 31 kilometers.

We also found that this service was terminated indefinitely due to various reasons in September 2019. However, the service was re-commissioned from 24 February 2020. But due to Corona pandemic, this service was again discontinued from 23 March.

Social scanning of the Facebook page Indiamoods Video that shared this video revealed that it has 1,633 followers.

Conclusion: The video of the cruise ship is actually from Greece and not from Gujarat, India.