Fact Check: Basil is not the main ingredient in Hydroxychloroquine

The post claiming Tulsi (basil) as the main ingredient in hydroxychloroquine is fake. 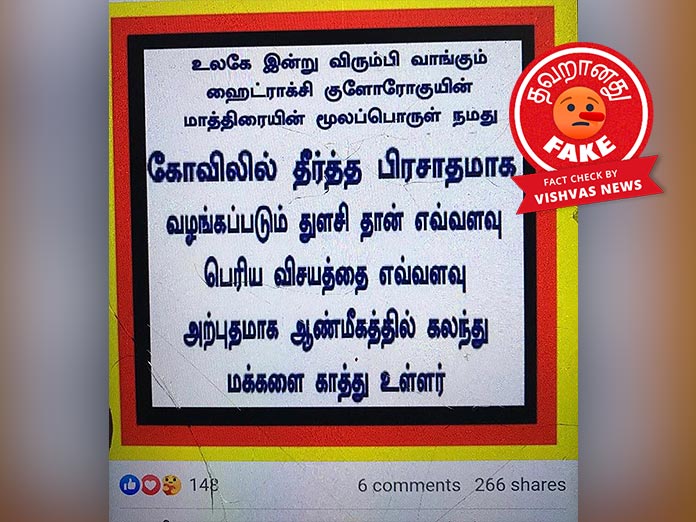 A viral post on social media claims that Tulsi (basil) is the main ingredient in hydroxychloroquine. Vishvas news first spotted it on a facebook group named Aathi Agathiar. The group has 36,000 members.  Vishvas news investigation revealed the claim is false.

CLAIM
A post on social media claims tulsi (basil) is the main ingredient in hydroxychloroquine. It further claims that the Tulsi water distributed at temples has saved lives.

On investigation, we found that basil has no role in production of hydroxychloroquine and is not the main ingredient.

According to Journal of Ayurveda and Integrative medicine, “Considered as a potent adaptogen, tulsi has a unique combination of pharmacological actions that promote wellbeing and resilience. While the concept of an “adaptogen,” or herb that helps with the adaptation to stress and the promotion of homeostasis, is not widely used in Western medicine, Western science has revealed that tulsi does indeed possess many pharmacological actions that fulfill this purpose”.

The journal Evidence- complementary and Alternative Medicine states, “Despite the lack of large-scale or long term clinical trials on the effect of tulsi in humans, the findings from 24 human studies published to date suggest that the tulsi is a safe herbal intervention that may assist in normalising glucose, blood pressure and lipid profiles, and dealing with psychological and immunological stress”.

Tulsi has been found to have several medicinal properties, however is not used in the production of Hydroxycholorquine.

Former President of All India Institute of Medical Sciences, Bhopal, Dr YK Gupta (retd) said,  “Hydroxychloroquine is purely synthetic material and has nothing to do with the plant. It is an allopathic medicine. It is a wrong claim that it contains basil.”

Dr Mohammed Rafiuddin Rashed, pharmacologist in HBS Hospital, Bangalore, said, “Chloroquine is extracted from Cinchona tree bark. On adding hydroxyl group, we get hydroxychloroquine. We get the semisynthetic modification of it. It does not contain Tulsi (basil)”.

He further pointed out that Ramdev’s Patanjali Ayurveda has submitted a proposal to the government for treatment and prevention of Covid-19 using medicinal herbs along with allopathic medicine hydroxychloroquine.
However, hydroxychloroquine does not contain Tulsi (basil), he said.

Conclusion: The post claiming Tulsi (basil) as the main ingredient in hydroxychloroquine is fake.