Fact Check: No, A Camel In An Image Can Not Help In Diagnosing Alzheimer’s﻿ 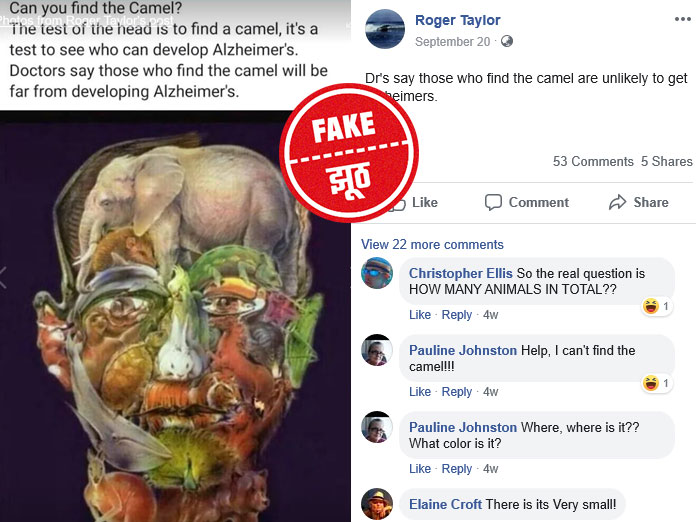 An unusual image is getting viral on social media with the claim that finding a camel in the image will help in determining the risk of Alzheimer’s. Vishvas News investigated and found that the image is edited and the claim is a rumor.

Vishvas News started its investigation by performing Google reverse image search of the viral image and found that the image is doctored. The doctored image is circulating online since 2012.

We can see that camel is inserted in the doctored picture. Whereas there is no camel in the original picture.

No camel in present in the original image

On the official website of Alzheimer’s Research UK, we searched articles on determining risks of Alzheimer’s by looking at an animal’s image, but no such study was mentioned.

Vishvas News spoke to Dr. Gururaj Mallikarjun who is a neurologist. He said:“this message is a hoax. It is a rumour that is spread to induce fear in people. People should not believe in such fake messages.”

What is Alzheimer’s diseases?

According to US Department of Health & Human Sciences, Alzheimer’s disease is an irreversible, progressive brain disorder that slowly destroys memory and thinking skills and, eventually, the ability to carry out the simplest tasks.

According to Alzheimer’s Association, The most common early symptom of Alzheimer’s is difficulty remembering newly learned information because Alzheimer’s changes typically begin in the part of the brain that affects learning. As Alzheimer’s advances through the brain it leads to increasingly severe symptoms, including disorientation, mood and behavior changes; deepening confusion about events, time and place; unfounded suspicions about family, friends and professional caregivers; more serious memory loss and behavior changes; and difficulty speaking, swallowing and walking.

Nowhere has it been mentioned that spotting an animal in the image can help in diagnosing risk of Alzheimer’s disease.

The post claiming that acamel in an image can help in diagnosing risk of Alzheimer’s is fake.