Fact Check: No, a drowned person cannot revive if covered in salt 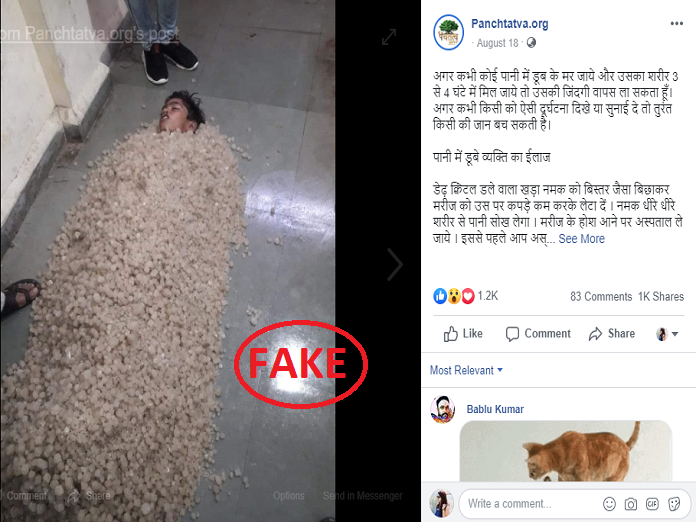 A photo is getting viral on social media showing a boy covered in a heap of salt. The post claims that a drowned person who is recovered within 3-4 hours can be revived if he is covered in salt. Vishvas News investigated and found that the viral post is fake.

A photo is doing rounds on social media showing a child covered in a heap of salt. The post is shared with a claim that reads: “If someone dies due to drowning and the body is found within 3-4 hours, remove the clothes of the deceased and cover the body in 1.5 quintal of salt. The salt will slowly drain the water out of the body. Once the person gets conscious, take him to a doctor. If you have taken someone who has drowned to a hospital and the doctors have declared him dead, proceed with the salt treatment. By God’s grace, everything will be all right. Do not hurry to cremate once the doctor has declared the patient dead.” The post has been shared on Facebook by a page named Panchtatva.org.

Vishvas News started its investigation by contacting the number mentioned on the viral post. There was no response from the number.

We further investigated and read the comments on the post shared on Facebook. Many users commented on the post that it is fake and no such treatment exists.

Vishvas News spoke to Dr. Harish Bhakuni of National Institute of Ayurveda, Jaipur. He said, “Salt is a natural preservative. But, when the person drowns, water gets into the lungs, in that case, the person may not survive. Once the person is dead, he cannot be brought back to life using this salt technique, which is totally fake. The person can be given CPR if he is conscious but, 3-4 hours after drowning, the survival is not possible.”

We searched online for news reports if any person survived using the salt treatment after drowning. We found reports mentioning families of people who fell for such superstitious beliefs but couldn’t revive the deceased.

On August 21, 2018, a news website reported an incident in which a family tried out this salt treatment to revive the deceased but nothing positive happened.

The post claiming that drowned person who is recovered within 3-4 hours can be revived if covered in salt is fake.