Fact Check: No, this exercise cannot cure heart blockage and back pain in 7 days 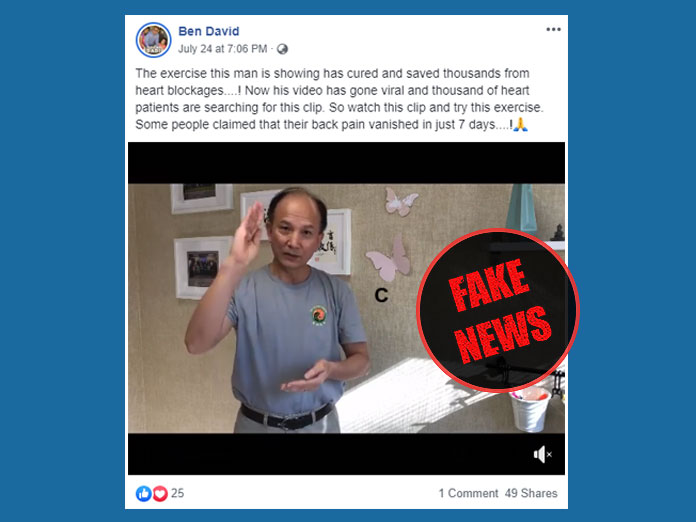 A video is getting viral on social media showing a man clapping his hands and performing some techniques. The video is accompanied by a claim which mentions that this exercise can cure heart blockages and back pain in 7 days. Vishvas News investigated by contacting some experts who say that this technique shown in the video cannot cure heart diseases or back pain. This is a fake claim.

A video is getting viral on social media with a claim that reads: “The exercise this man is showing has cured and saved thousands from heart blockages….! Now his video has gone viral and thousands of heart patients are searching for this clip. So watch this clip and try this exercise. Some people claimed that their back pain vanished in just 7 days….!”

Vishvas News started its investigation by uploading the video on InVid Tool to identify the source of the viral video. Using the reverse image search of the screengrabs, we found the identity of the person who is shown in the video and when was the video initially shared.

We searched on Google using relevant keywords and did not find any reliable medical reports suggesting that the technique mentioned in the viral videos cures heart problems or body aches.

Vishvas News contacted Dr. C. P. Shrivastava who is a Senior Cardio Vascular Surgeon. He said that the claim in the video stating that heart blockages and back pain can be cured by clapping hands 9 times, cupping elbows cupping and armpits is absolutely fake. Many people do fall prey to such fake news but end up having troubles later.

We further contacted Acupuncture Clinic, Delhi. As per the specialist, this is not the process that is followed in acupuncture for the treatment of heart blockages or back pains.

The claim in the viral video stating that performing the exercises shown in the video can cure heart blockages and back pain is fake.