Post claiming WHO warns of Nipah Virus outbreak in India in June 2020 in misleading. WHO warned of Nipah outbreak in 2018, There has been no fresh alert from the global health body. 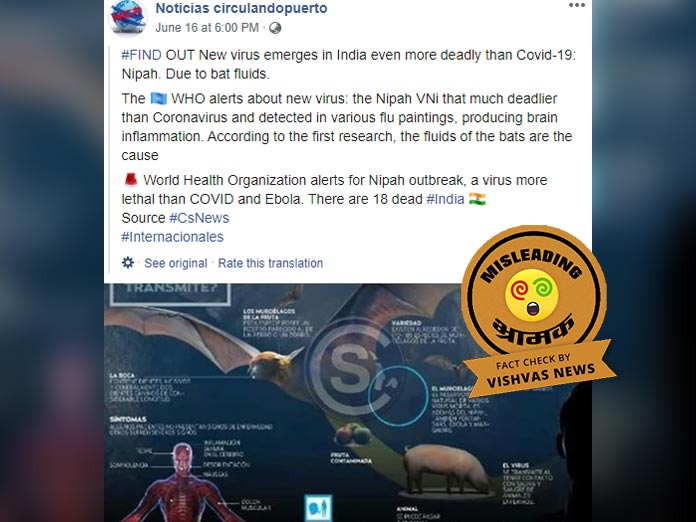 New Delhi (Vishvas News): A recently viral Facebook post claims that the
World Health Organization (WHO) alerts for Nipah outbreak in India, a virus more lethal than COVID-19 and Ebola. Vishvas News investigated and found the viral claim misleading. WHO warned of Nipah outbreak in 2018,
there has been no fresh alert from the global health body.

A Facebook post reads: “#FIND OUT New virus emerges in India even more deadly than Covid-19: Nipah. Due to bat fluids. The WHO alerts about new virus: the Nipah VNi that much deadlier than Coronavirus and detected in various flu paintings, producing brain inflammation. According to the first research, the fluids of the bats are the cause. World Health Organization alerts for Nipah outbreak, a virus more lethal than COVID and Ebola. There are 18 dead #India.” The archived version of the post can be checked here.

Vishvas News investigated and found an article by New York Times dated June 4, 2018. As per the report, experts consider a possible epidemic threat has broken out in the state of Kerala, India, the Nipah Virus, for the first time, infecting at least 18 people and killing 17 of them, according to the World Health Organization.

A report by WHO on August 7, 2018 also confirmed that as of 17 July 2018, a total of 19 Nipah virus (NiV) cases, including 17 deaths, were reported from Kerala. It further stated that no new cases or deaths have been reported since 1 June 2018 and, as of 30 July, human-to-human transmission of NiV has been contained in Kerala State.

Vishvas News further searched and tried finding reports on whether WHO has recently made any statement or issued any warning regarding Nipah Virus in India. There were no latest reports on official website of WHO and on its social media handles.

We spoke to the spokesperson of WHO and also asked regarding the viral post. She said: “This is an old news that is going viral as recent. There has been no Nipah case in India this year, and WHO has not given any such alert this year.”

The post is shared on Facebook by a page named Noticias circulandopuerto. When Vishvas News scanned the page we found that the page has 59,586 followers till date.

Conclusion: Post claiming WHO warns of Nipah Virus outbreak in India in June 2020 in misleading. WHO warned of Nipah outbreak in 2018, There has been no fresh alert from the global health body.