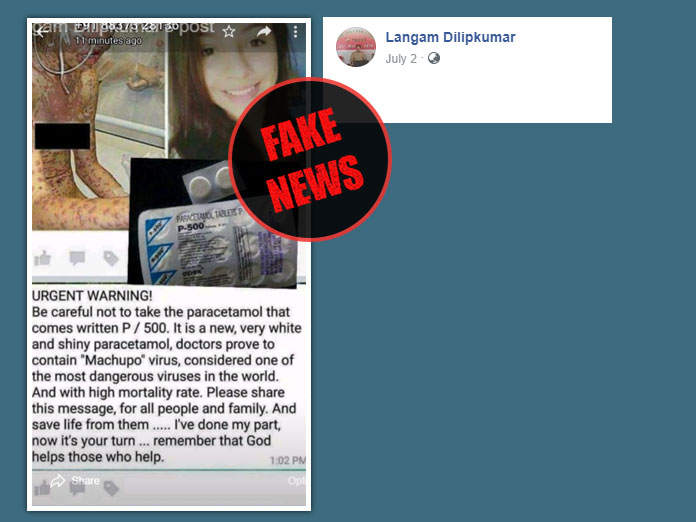 A viral message on Facebook warns people not to consume Paracetamol with P-500 written on them. The message claims that Paracetamol P-500 tablet contains ‘Machupo’, a deadly virus. The post is shared with two photos, one is the girl and the other photo shows someone with red rashes in her entire body. Vishvas News investigated and found that the viral post is fake.

A post shared on Facebook by a user named Langam Dilipkumar reads: URGENT WARNING! Be careful not to take the paracetamol that comes written P / 500. It is a new, very white and shiny paracetamol, doctors prove to contain “Machupo” virus, considered one of the most dangerous viruses in the world. And with high mortality rate. Please share this message, for all people and family. And save life for them… I’ve done my part, now it’s your turn… remember that God helps those who help. The post is shared also with two photos. In one phone a girl can be seen and in other photo someone with red rashes in her body.

Vishvas News started the investigation by searching the keywords “Machupo virus” on Google. We found an advisory on the official website of Health Sciences Authority (HSA) of the Singapore Government dated August 2, 2017. The advisory stated that the post warning that Paracetamol P-500 tablets should not be consumed as they contain the “Machupo” virus is a hoax.

We further searched about Machupo virus and found that the “Machupo” virus, or the Bolivian haemorrhagic fever (BHF) virus, is a virus that causes symptoms, including fever, muscle pains, bleeding gums and seizures. The “Machupo” virus infection is contracted by direct contact with the virus, which has been shown to be transmitted mainly by the saliva, faeces and urine of infected rodents. To date, “Machupo” virus infections have only been documented in South America.

Vishvas News further searched and found a press release issued by the Malaysian government. As per the press release, the “Machupo” virus is classified in a group of Arenavirus virus that can cause dengue fever. For now, the virus is only found in South America. It is spreading through the urine or stool of the infected rat. Like most another virus, this virus can not live in a dry environment like tablets paracetamol.”

We further researched and found an official statement issued by the Indonesian Food and Drug Administration (BPOM). As per the statement, they have not received a credible report that supports the claim that the Machupo virus has been found in Paracetamol or other medicinal products.

We also contacted Dr. Sajeev Kumar, who is a General Physician. He stated: No, Paracetamol does not contain Machupo virus. This news is fake and is circulating online since many days.

The post claiming Paracetamol P-500 tablets contain “Machupo” virus is fake. The post is getting viral on social media since long time.