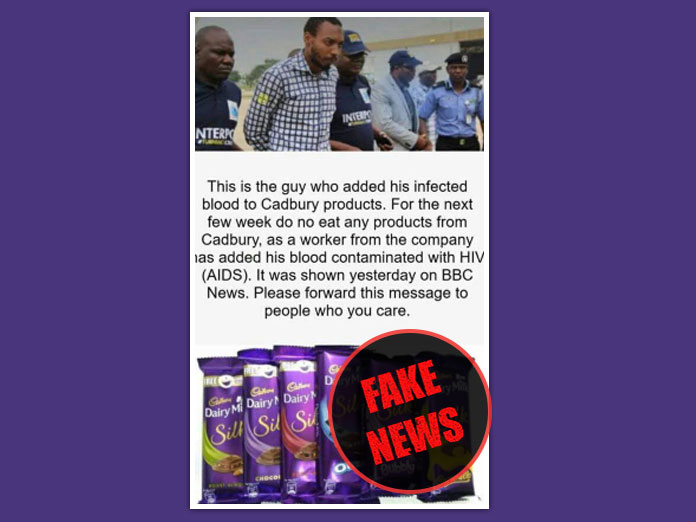 A post is getting viral on social media featuring a photo of a man with his hands tied and identified as a worker from Cadbury. As per the viral claim, the man shown in the post is a worker from Cadbury and was arrested for contaminating Cadbury with his HIV-positive blood. The post advises people to avoid eating Cadbury’s products. The post also states that the message has been shown on BBC as well. Vishvas News team investigated and found that the viral post is fake.

The viral post features a photo of a man along with some officials. The text in the post reads: ‘This is a guy who added his infected blood to Cadbury products. For the next few week do not eat any products from Cadbury, as a worker from the company has added his blood contaminated with HIV (AIDS). It was shown yesterday on BBC News. Please forward this message to people you care.’

In our investigation, we found that the picture of the man featured on the viral post was that of Aminu Sadiq Ogwuche, the alleged mastermind of the Nyanya bomb attack in Nigeria’s Federal Capital. The photo is taken in July 2014 when the alleged mastermind arrived in a Nigeria Air Force aircraft and was handed over to operatives of Department of State Security (DSS) and Nigeria’s Interpol.

We also found various news reports related to the incident. Here are some examples:

This proves that the man featured in the post is the alleged mastermind of the Nyanya bomb attack in Nigeria’s Federal Capital.

The post also claims that the guy featured in the image added his HIV-infected blood to Cadbury products and is a worker at Cadbury.

In order to verify the claim, we contacted Cadbury India Pvt. Ltd. An official named Vivek Singh said: “We have been hearing these fake claims for a long time. These are false accusations. These types of fake news are spread in order to tarnish the company’s image. No such thing happened.”

We scanned the official social media handles of Cadbury on whether they’ve posted anything related to the accusation and we landed to the following reply made by Cadbury to a user:

On the official website of Centers for Disease Control and Prevention, we searched whether HIV can be transmitted from food. We found a report that stated: You can’t get HIV from consuming food handled by someone with HIV. Even if the food contained small amounts of HIV-infected blood or semen, exposure to the air, heat from cooking, and stomach acid would destroy the virus.

We found another report on the official website of World Health Organisation (WHO) that stated: HIV can be transmitted via the exchange of a variety of body fluids from infected individuals, such as blood, breast milk, semen, and vaginal secretions. Individuals cannot become infected through ordinary day-to-day contact such as kissing, hugging, shaking hands, or sharing personal objects, food or water.

We contacted Dr. Sajeev Kumar, General Physician to ask whether HIV can be transmitted by eating chocolate and he suggested: This is not a mode of HIV transmission. Even if the chocolate contained small amounts of HIV-infected blood, the exposure to the air, heat from cooking, and stomach acid would have destroyed the virus.

No, Cadbury products are not contaminated with HIV Positive Blood. The viral post is fake.