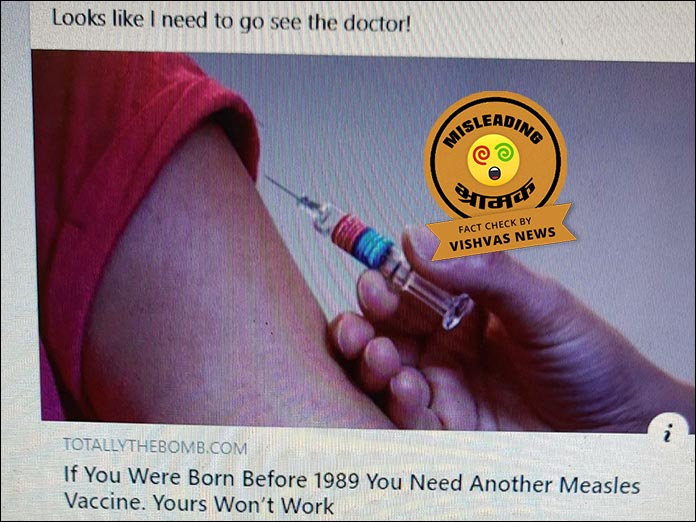 New Delhi (Vishvas News): A post going viral on social media claims that if someone is born before 1989 they to revaccinate with another measles vaccine as the first one won’t work. Vishvas News investigated and found the viral post to be misleading. According to experts, in some cases, a top-up vaccine may be advisable but there are no recommendations to revaccinate all people born before 1989.

A post shared on Vishvas Whatsapp Chatbot claims that if someone is born before 1989 they to revaccinate with another measles vaccine as the first one won’t work.

When Vishvas News investigated we found that the viral claim is taken from a website named totallythebomb.com.

According to World Health Organization (WHO), Measles is a highly contagious, serious disease caused by a virus. Measles is caused by a virus in the paramyxovirus family and it is normally passed through direct contact and through the air. The virus infects the respiratory tract, then spreads throughout the body. Measles is a human disease and is not known to occur in animals.

Nowhere does the World Health Organization (WHO) specify fresh vaccinations for people born before 1989.

We searched on the website of Centers for Disease Controls and Prevention (CDC) but didn’t find whether there is a need for people born before 1989 to revaccinate for measles.

According to the CDC website, what it currently considers to be a person protected against measles, depending on the doses they have received.
CDC has mentioned the following guidelines for the protection from measles:

Am I protected against measles?

CDC considers you protected from measles if you have written documentation (records) showing at least one of the following:
• You received two doses of measles-containing vaccine, and you are a(n) —
o school-aged child (grades K-12)
o adult who will be in a setting that poses a high risk for measles transmission, including students at post-high school education institutions, healthcare personnel, and international travelers.
• You received one dose of measles-containing vaccine, and you are a(n) —
o preschool-aged child
o adult who will not be in a high-risk setting for measles transmission.
• A laboratory confirmed that you had measles at some point in your life.
• A laboratory confirmed that you are immune to measles.
• You were born before 1957.

I am an adult now but only got one dose of measles vaccine as a child. Do I need a second dose?

If you were born after 1957 you need at least one dose of measles vaccine unless a laboratory confirmed that you had past measles infection or are immune to measles. Certain adults may need 2 doses. Adults who are going to be in a setting that poses a high risk for measles transmission should make sure they have had two doses separated by at least 28 days. These adults include
• students at post-high school education institutions
• healthcare personnel
• international travelers
• people who public health authorities determine are at increased risk for getting measles during a measles outbreak

Yes, people who know they got the killed measles vaccine (an earlier formulation of measles vaccine that is no longer used) should talk to their doctor about getting revaccinated with the current, live measles-mumps-rubella (MMR) vaccine.

Not many people fall into this group; the killed vaccine was given to less than 1 million people between 1963 and 1967.

Vishvas News spoke to Dr. Praful Bharadwaj who is a Health Officer in UNICEF regarding the viral claim. He said: “There can be multiple strategies for stopping the outbreak in times of outbreak but currently there is no recommendation regarding any revaccination of adults.”