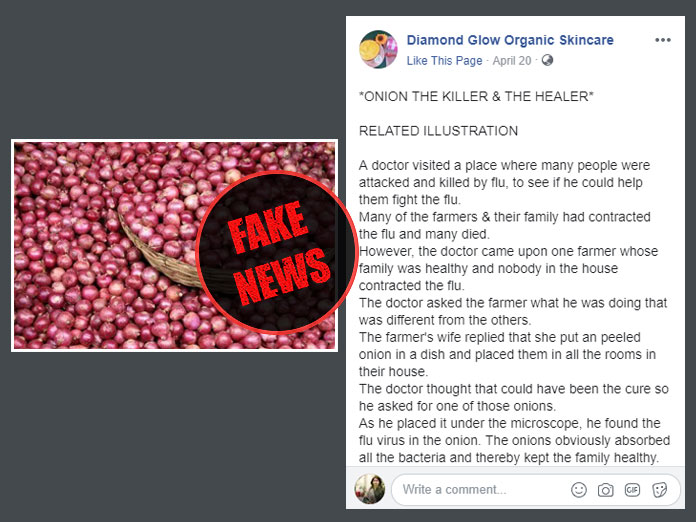 A post is getting viral across social media claiming that onions absorb bacteria and so when they are left outside they can keep the bacteria away from you. Because of this reason, onions left outside should not be consumed. The post further claims that onions prevent us from cold and flu.

1. Onions ABSORB BACTERIA and that is the reason why they are also good at preventing us from getting *colds & flu* if left peeled in our room

2. Onions are huge magnets for bacteria

3. Never ever keep a portion of sliced onion over a period of time and thereafter use it to prepare food

Vishvas News started its investigation by breaking down various elements of the viral post.

As per the National Onion Association, the message has no scientific legs. The article reads: There is no scientific evidence that a cut raw onion absorbs germs or rids the air of toxins/poisons. A wives tale that dates back as far as the 1500s claims that placing a cut raw onion in rooms throughout a residence could protect its occupants from getting the bubonic plague. Long before germs were discovered, the dominant belief was contagious diseases were spread by miasma, or “noxious air.”

While false, this belief remained part of folk medicine through the 19th century claiming to ward off epidemics like smallpox, influenza, and other “infectious fevers.”

This claim stems from a blog post that dates back to March 2008. While the original post was removed from the internet in 2009, part of that post continues to circulate the internet.

The National Onion Association has also issued a letter to consumers about cut onion claims. The letter states that information has circulated online as email chain messages and across social media making claims that cut onions can cure the flu, are magnets for bacteria, and claiming cut onions are responsible for food poisoning. The claims come from multiple sources and are false. The anecdote from the 1919 influenza epidemic claims cut onions placed around the house will fight off the flu virus. While people insist this folk belief works, no scientific evidence exists to back up the claims. Furthermore, cold and flu viruses are spread by contact, not by floating in the air where the onion can supposedly attract or destroy them.

As per Dr. Joe Schwarcz, Director of the McGill University’s Office for Science and Society, onions are not especially prone to bacterial contamination.  In fact, quite the opposite.  Onions feature a variety of sulphur compounds that have antibacterial activity.  (of course, that doesn’t mean they can in any way protect against the flu which is a viral disease).

A Wall Street Journal article from 2009 states, “Biologists say it’s highly implausible that onions could attract flu virus as a bug zapper traps flies. Viruses require a living host to replicate and can’t propel themselves out of a body and across a room.”

She quoted: Absolutely it is a myth. Onions feature a variety of sulphur compounds that have antibacterial activity, but that doesn’t mean they can in any way protect against the flu.

The post claiming that onions absorb bacteria to prevent flu is fake.