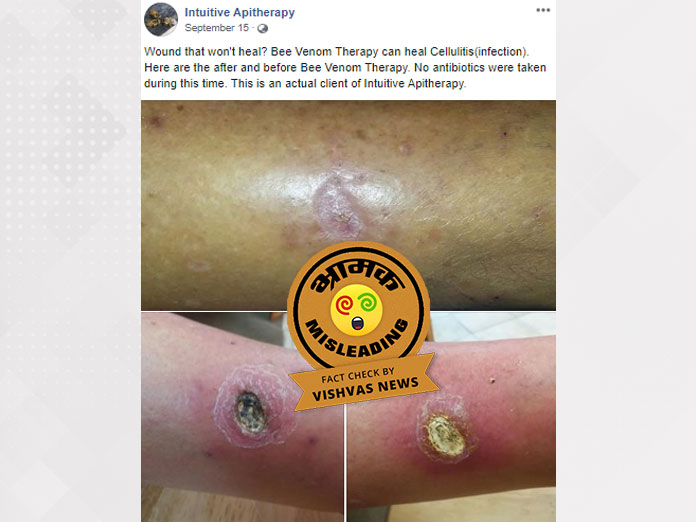 A viral post on Facebook claims that Bee Venom Therapy can heal Cellulitis (infection). It also shows the pictures of the wound which has shown improvement due to the bee venom therapy. Vishvas News investigated and found that the viral post is misleading.

Vishvas News started its investigation by searching about the Bee Venom Therapy on the internet. We found a report on the official website of Food and Agricultural Organization of the United States. In the article, it had been stated that: “this therapy using live bees is applied directly to the patient. Hippocrates referred to the medical use of bee venom, and still today, many beekeepers believe that bee stings are beneficial for the treatment of rheumatoid arthritis: it is often stated that few beekeepers suffer from this disease. However, this is anecdotal evidence. Despite the lack of scientific confirmation that sting therapy benefits chronic, incurable diseases, some sufferers of multiple sclerosis and rheumatoid arthritis are convinced that it does help.”

Even though some people believe bee stings are beneficial, however research in some of these areas lacks scientific confirmation.

The woman’s case has been reported in the Journal of Investigational Allergology and Clinical Immunology, by doctors from the allergy division of University Hospital, Madrid.

We also found an article on the website of Forbes titled: Bee Venom Acupuncture: A Therapy That Could Kill You. The article has been submitted by Robert Glatter who is an emergency physician on staff at Lenox Hill Hospital in New York City.

The article also mentioned the report in the Journal of Investigational Allergology and Clinical Immunology about the case of a 55-year-old Spanish woman who died after having an alternative procedure known as bee venom acupuncture, in which live bee stings were used, as opposed to standard acupuncture needles.

We also found a review that analyzed the effect of Bee Venom Therapy on arthritis. The review observed that the sample size and quality were low to draw firm conclusions.

According to a case report by the Medicine Science International Medicine Journal, “Reactions caused by bee stings are divided into two groups as early and late. Early reactions start from 15 minutes to 4 hours. They cause severe anaphylaxis and can cause death. Local reactions and anaphylaxis occur early. Late reactions usually occur after 7-10 days. In the late period, they cause diseases such as Myasthenia Gravis, myocarditis, Gullian Barre like polymyelitis, peripheral neuritis, glomerulonephritis, vasculitis.”

Vishvas News spoke to Dr. Thomas of the National Poisons Information Centre, Department of Pharmacology at AIIMS. He said, “We discourage the practice of Bee venom treatment as it can cause problems rather than having health benefits.”

According to the official website of US National Library of Medicine, National Institute of Health, Apitherapy is part of the traditional medicine based on bee product use. Complementary medicine practices which incorporate use of some traditional herbal, mineral, or animal kind substances very often are discussed with pharmacy professionals because these products are often sold in pharmacies as dietary supplements.

It further states that Bee venom is mostly known as anti-inflammatory and pain-reducing agent and, in form of bee stings, apipuncture, injections, and so forth, is used by apitherapy practitioners in some countries to treat arthritis or other diseases, but there is still a great need for evidence-based knowledge.

Post claiming that Bee venom can treat infections is misleading.