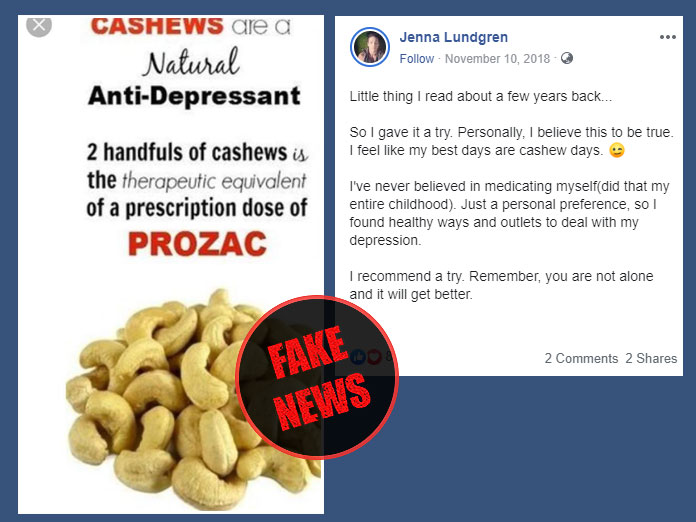 A post is getting viral on social media claiming that cashews are anti-depressants and two handfuls of cashews are the therapeutic equivalent of a prescription dose of PROZAC. Vishvas News investigated and found that the viral post is fake.

A viral post on social media reads: “CASHEWS are natural anti-depressants. 2 handfuls of cashews is the therapeutic equivalent of a prescription dose of PROZAC.” The post is shared on Facebook by a user named Jenna Lundgren.

A claim getting viral in which two handfuls of cashews have wholly replaced prescribed antidepressant, Prozac.

Vishvas News started its investigation by searching online reports on the viral claim. The claim appeared to be taken from an article published at the website doctoryourself.com. As per the article titled “An alternative to Prozac”, “one big handful of cashews provides one to two thousand milligrams of tryptophan, which will work as well as prescription antidepressants… but don’t tell the drug companies.”

On searching the details of the author of the article, Vishvas news found that Dr. Andrew Saul who related Cashews and Prozac for tryptophan content is a Nutritionist and not a Psychiatrist.

We found a report on Medical Daily website, titled ‘Diet For Depression And Anxiety: 5 Natural Mood-Enhancer Foods To Lift Your Mind’. It stated: Cashews are also a good option since they contain iron, magnesium, Vitamin B6, protein, and important amino acids and even omega 3 fats. Cashews contain tryptophan, which is critical for improving the uptake of serotonin in the brain, reducing feelings of depression.

As per the article on Medical Daily, although Cashews can help in natural mood-lifting to reduce depression, the claim that two handfuls of Cashews can become the therapeutic equivalent of a prescription dose of Prozac in treating depression is questionable. We researched and found no medical documentation supporting the viral claim.

Vishvas News spoke to DR ANIL YADAV who is a Psychiatrist at AIIMS, Delhi. He said, “Prozac is an anti-depressant and cashews cannot replace them. This is not true that two handfuls of cashew can replace Prozac.”

We also spoke to Dr. Anil Tambi who is a Psychiatrist at Sawai Man Singh Hospital, Jaipur. He said, “No, cashews cannot replace Prozac. This is not true.”

We also spoke to a General physician, Dr. Sajeev Kumar. He said, “No, not medically documented that cashews are natural anti-depressants. Two handfuls of cashews are not the therapeutic equivalent of a prescription dose of Prozac.”

The claim that two handfuls of cashews are the therapeutic equivalent of a prescription dose of PROZAC is fake.