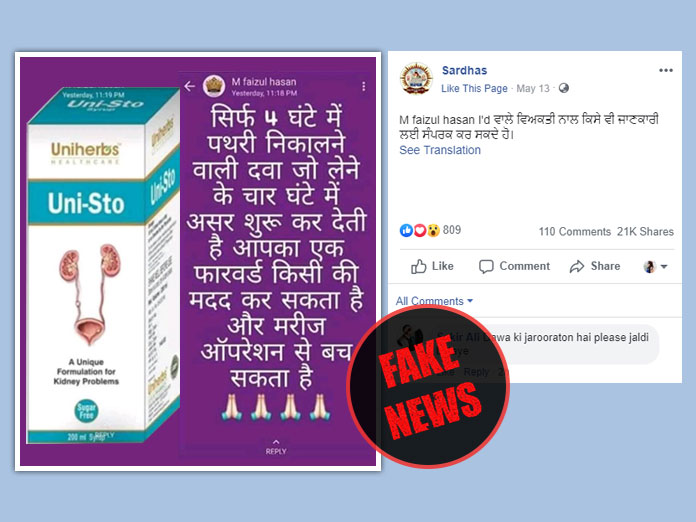 A Facebook post is getting viral in which a screenshot of an image of medicine is shared along with a description. As per the claim, the medicine shown in the image ‘Uni-Sto’ can remove stones in just 4 hours. Vishvas News team investigated and found that the claim is false.

We searched the name of the company Uniherbs on Google as mentioned on the image of the medicine. We found three results with the same name, uniherbs.com (A company based out of the United States of America) and Uniherbs India and Uni Herbs.

We then searched about Uniherbs India. On searching the details of the company we found that the company is based out of Lucknow and supply supplements only for animals.

We further investigated and contacted Uniherbs India. The official at Uniherbs India said: “We receive multiple calls on a daily basis asking whether Uni-Sto is our product. We have not manufactured any such product. This is fake. We only supply animal supplements.”

We then searched for Uni Herbs. We found a Facebook page of Uni Herbs.

The logo of this company UNI Herbs also did not match with the logo of the medicine shown in the viral image.

We observed on the Facebook post that neither the composition of the medicine nor the price was mentioned by the Facebook user who shared the image or whose reference has been provided in the screenshot.  The reference of M Faisul Hasan was shown on the screenshot of the image who apparently shared the post. No information related to M Faisul Hasan was available anywhere on the web.

We contacted Dr. Sajeev Kumar, General Physician and he said: “the cure of stone will depend on where exactly it is, what is its size and what is its type. This is a fake news.”

We checked the profile of the Facebook page ‘Sardhas’ who shared the viral post using StalkScan tool. We observed that many posts shared by the page were either misleading or fake.

The post claiming Uni-Sto medicine can cure stones in 4 hours is fake. We investigated the claim by breaking it into various elements and found that the claim is false.