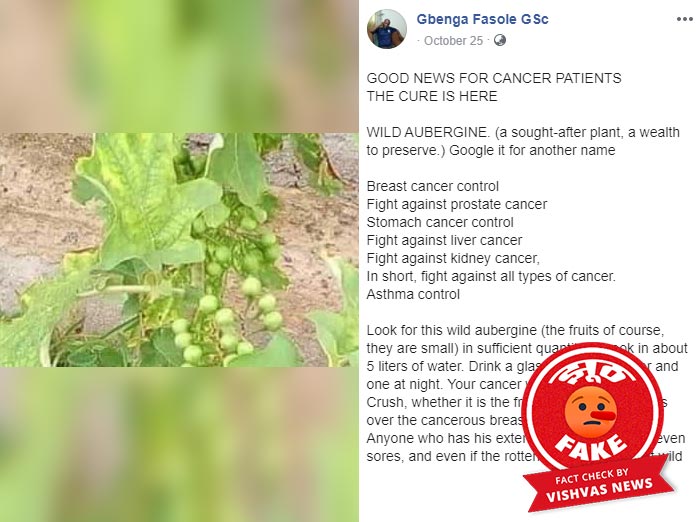 A post shared on Facebook starts with: GOOD NEWS FOR CANCER PATIENTS, THE CURE IS HERE. Such headlines that claim to cure deadly diseases attract hundreds of readers who click on it and sometimes fall prey to it. The viral post on social media claims that wild aubergine can cure diseases such as breast cancer, prostate cancer, stomach cancer, liver cancer, kidney cancer, and asthma. Vishvas News investigated and found that the viral post is fake.

A viral post on Facebook shared by a user named Gbenga Fasole GSc reads: “GOOD NEWS FOR CANCER PATIENTS THE CURE IS HERE WILD AUBERGINE (a sought-after plant, a wealth to preserve). Breast cancer control, Fight against prostate cancer, Stomach cancer control, Fight against liver cancer, Fight against kidney cancer, In short, fight against all types of cancer, Asthma control. Look for this wild aubergine (the fruits of course, they are small) in sufficient quantity to cook in about 5 liters of water. Drink a glass of morning beer and one at night. Your cancer will disappear. Crush, whether it is the fruit or the leaf, and pass over the cancerous breast. Anyone who has his external cancer, and who even sores, and even if the rotten wound, crush that wild eggplant or it’s leaves and pass over the wound while drinking the decoction. It will kill cancer outright. Nb: Use enough until at least a month. Do not use once or twice and then stop. Drink the decoction, use the crush on the cancerous breast or the cancerous part externally. Destroys any form of cancer in the human body. The wild eggplant is found in bush to pick. If you do not have bush in your locality because you are in town, go to the village and look for it. Finish with cancer. Good healing to all. Many herbalists testifies of using my remedies to treat all kind of sicknesses.”

When Vishvas News started investigating we found that the story is shared by a lot many users on Facebook.

We further investigated and found that this viral claim is supposedly endorsed by doctors. A Facebook post dated October 20, 2019, on the page named Dr. Gilliard Pharmacy claims that drinking wild aubergine mixed with water will make cancer disappear.

The page named Dr. Gilliard Pharmacy endorsed the use of aubergine for cancer cure.

Vishvas News further investigated by performing the Google reverse image search of the profile photo of the page which shows a man wearing a stethoscope.

When we performed Google Reverse Image search we found a number of posts with the same picture.

On further research, we found that the photo of the person is not of Dr Gilliard but actually an American doctor called Paul Rivas.

Many comments on the viral post expressed gratitude for the advice and have asked for more information about the recipe.

When Vishvas News contacted Dr. Manish Singhal who is an oncologist at Indraprastha Apollo Hospital, he denied any connection between the treatment of cancer with aubergine.

Where did the claim originate from?

Vishvas News further investigated by performing keyword search on Google. We landed on a post on the page named Truth About Cancer.

The post features a video on “Eggplant Cancer Cure”. In the video, it was mentioned “Watch as Dr. Wright shares how Dr. Bill Cham discovered the eggplant extract cream known as BEC5 or Curaderm.”

The video promotes the eggplant extract cream known as BEC5 or Curaderm.

On the official website of BEC5 or Curaderm, it is mentioned that it is ‘The Eggplant Skin Cancer Cream’.

When Vishvas News further investigated we found that in 2015, on the official website of US Food and Drug Administration, a warning letter was issued reprimanding the company behind Curaderm for marketing the product without their approval.

This means, that ‘eggplant skin cancer cream’ has not been approved by the FDA but is still in the market.

The post claiming that consuming the decoction of wild aubergine can cure any type of cancer is fake.