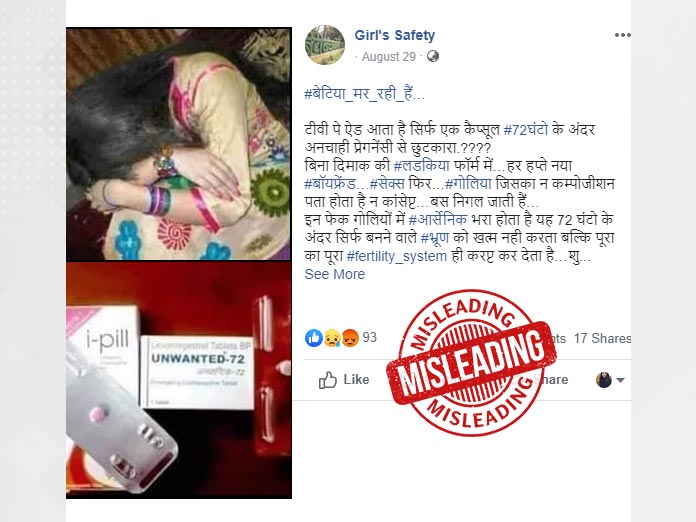 When we searched Levonorgestrel as a keyword on Google, on the official website of National Center for Biotechnology Medicine, US National Council of Medicine, we found that “Levonorgestrel, also known as the morning-after pill, is a first-line oral emergency contraceptive pill that has approval from the World Health Organization to prevent pregnancy. It is FDA approved to be used within 72 hours of unprotected sexual intercourse or when a presumed contraceptive failure has occurred.”

Vishvas News visited the official website of World Health Organization (WHO) and found that the emergency contraceptive pill regimens recommended by WHO are ulipristal acetate, levonorgestrel, or combined oral contraceptives (COCs) consisting of ethinyl estradiol plus levonorgestrel.

We searched about contraceptive medicines containing arsenic but did not find any related information.

We also searched on the official website of World Health Organization (WHO), there was no mention of arsenic in the description of contraceptive medicines.

Vishvas News spoke to Dr. Anuradha Sharma who is a gynecologist, and she said “Contraceptive pill should not be used quite often. If used once in a while it does not cause any problem. One should not make it a practice. It doesn’t cause cancer. But, it should always be used under medical supervision.”

We also spoke to Dr. Manish Singhal, who is an Oncologist at Indraprastha Apollo Hospital. He said: “Long exposures to contraceptive pills can be harmful. But, once in a while, it doesn’t cause problems. No, it doesn’t contain arsenic.”

Vishvas News investigated and found that contraceptive pills do not contain arsenic and it doesn’t destroy the fertility system in 72 hours, as suggested by doctors. Doctors further suggest that long exposures of contraceptive pills should be avoided.