Post claiming coconut oil can prevent dengue is fake. Dr. B. Sukumar has not prescribed coconut oil for dengue prevention as claimed in the viral post. 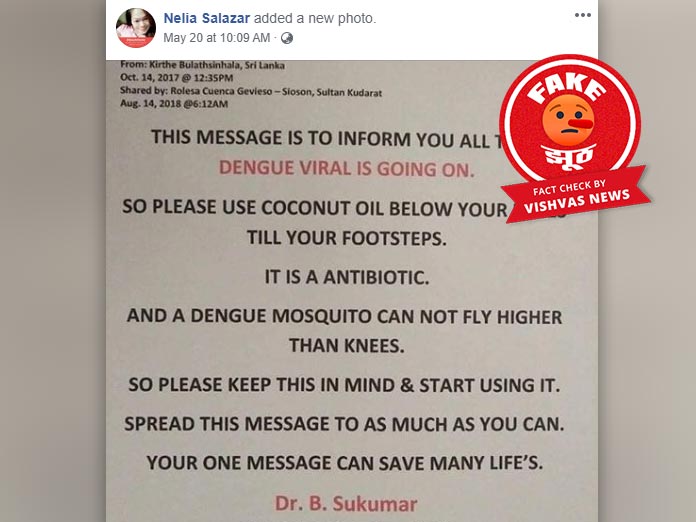 New Delhi, (Vishvas News): A post has resurfaced on social media in which it is claimed that coconut oil prevents dengue if applied below the knees. The message is attributed to Dr. B. Sukumar of Sri Saisudha Hospital, Tirupati. Vishvas News had earlier investigated and found that the viral post is fake. Vishvas News spoke to Dr. B. Sukumar and he said that he didn’t prescribe coconut oil for dengue prevention as claimed in the viral post.

A message that has resurfaced on social media reads: “This message is to inform you all that the dengue viral is going on. So please use coconut oil below your knees to your footsteps. It is an antibiotic. And a dengue viral can not fly higher than knees. So please keep this in mind & start using it. Spread this message to as much as you can. Your one message can save many life’s.” The message is attributed to Dr. B. Sukumar of Sri Saisudha Hospital. The archived version of the post can be checked here.

Vishvas News spoke to Dr. B. Sukumar from Sri Saisudha Hospital, Tirupati regarding the message going viral by his name. He said: “This message is fake. I have not given any such statement. This message is circulating for many years by my name. This is wrongly attributed to me. I have never written such a letter or prescribed coconut oil for dengue.”

We also performed various searches in the fact check we did earlier to debunk this post. The complete fact check can be read here.

There is no scientific evidence supporting the claim coconut oil can prevent dengue.

As per the US National Library of Medicine, Virgin coconut oil does have some antimicrobial properties but there are no randomized controlled trials that have proven its efficacy in active infection.

We scanned the social profile of the user who shared the post. We found that the user named Nelia Salazar is based out of Leyte, Philippines.

Conclusion: Post claiming coconut oil can prevent dengue is fake. Dr. B. Sukumar has not prescribed coconut oil for dengue prevention as claimed in the viral post.