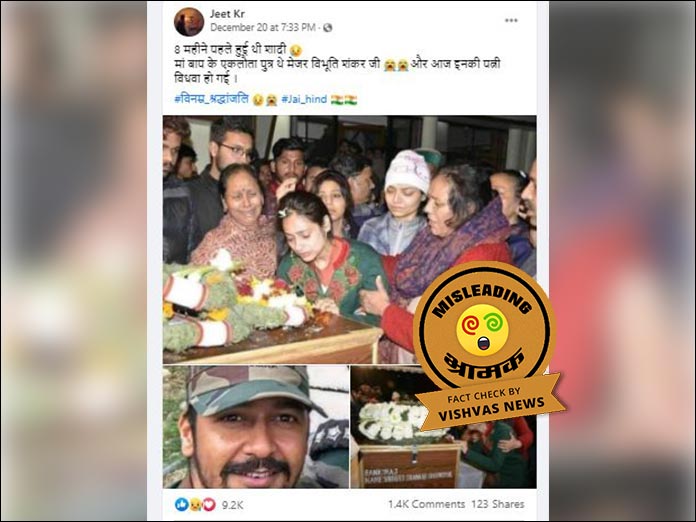 New Delhi (Vishvas News): A post with 3 pictures is going viral on social media. In the first picture, a weeping woman can be seen in front of a coffin. The second picture shows an Indian Army Soldier and the third picture shows a coffin with the name Major Vibhuti Shankar Dhoundiyal inscribed on it. It is being claimed with the post that Major Vibhuti Shankar Dhoundiyal died recently.

A user named Jeet Kr shared a post on the page named SUPPORT INDIAN ARMY writing (translated in English): “Married 8 months ago.” The only son of the parents was Major Vibhuti Shankar ji and today his wife is a widow.”

We started our investigation by searching the pictures on Google using Google Reverse Image Tool. We found the picture of Mayor Vibhuti Shankar in the news report published in Jagran dated February 18, 2019. The news headlined (English translation) “The patriotic lessons learned from the same School by Martyr Major Vibhuti Dhoundiyal and Chitresh Bisht” stated that Major Vibhuti Dhoundiyal was killed in a terrorist encounter in Pulwama in February 2019.

We found the remaining two photos in a photo gallery posted in Amar Ujala dated February 20, 2019. The headline of the report was, “Pulwama Encounter: Heart-wrenching pictures of Martyr Vibhuti.”

Vishvas News spoke to Arun from the Indian Army PRO to verify the claim. He said, “Major Vibhuti Shankar was martyred 2 years ago in Pulwama terror attack that happened in February 2019.”

We scanned the Facebook page named SUPPORT INDIAN ARMY that shared the viral post. We found that the page has 566.9K followers.