Fact Check: BJP did not announce in it’s manifesto to change Tamil Nadu’s name as Dakshina or Nitchala Pradesh, viral claim is fake

The viral claim is fake. BJP has not made any such announcement in their manifesto. 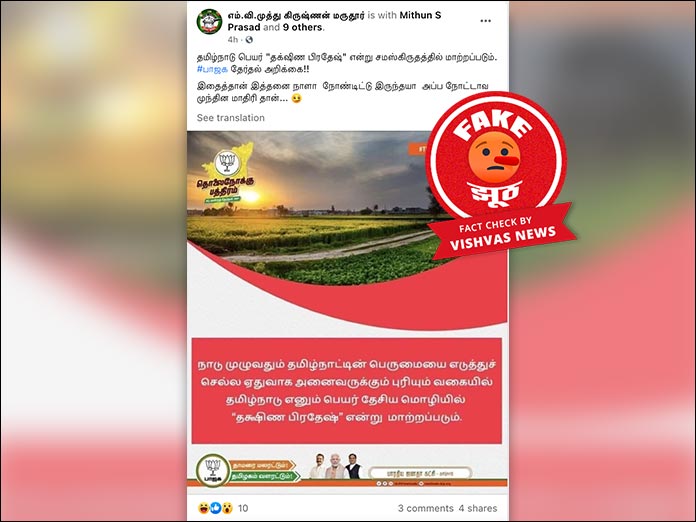 New Delhi (Vishvas News). A viral picture allegedly of the BJP manifesto claims the name of the state ‘Tamil Nadu’ will be changed to ‘Dakshina Pradesh’ for gaining recognition. Another user have shared a similar picture stating the name will be changed as ‘Nitchala Pradesh’.

Vishvas News investigation revealed the the party’s manifesto has been edited using photoediting tools and shared with fake claims.

A picture allegedly of a BJP manifesto shared on Twitter and Facebook claims the name of the state of Tamil Nadu will be changed to ‘Dakshina Pradesh’ in national language for everyone’s understanding and gaining national recognition.

Another Facebook user have shared a picture claiming the name will be changed as ‘Nitchala Pradesh’.

A day after the BJP party released its manifesto for Tamil Nadu election in Chennai, several social media users have shared the viral picture expressing severe disagreement. While we found news reports on the party’s key promises to improvise jobs and agriculture, we did not fine any authentic sources confirming the viral claim.

We found the original picture of the manifesto to improvise agriculture and farmers in a tweet by the BJP Tamil Nadu.

The entire manifesto by the BJP party for Tamil Nadu elections 2021 can be seen here.

Vishvas News contacted Sudhakar Reddy, BJP National Co-incharge, Tamil Nadu for verification. “BJP has not made any such announcement. Our manifesto poster has been edited and shared with fake claims. We will initiate legal action,” said Reddy to us on call.

Social scanning of the user who shared the viral picture revealed that he lives in Singapore and has 3,501 followers on Facebook.

Conclusion: The viral claim is fake. BJP has not made any such announcement in their manifesto.