Fact Check: BJP did not say it will lose 2021 Assembly polls, viral breaking plate is edited

According to our investigation, the viral claim is false. BJP has not said that it will lose 2021 Assembly polls. Viral screenshot is also edited. 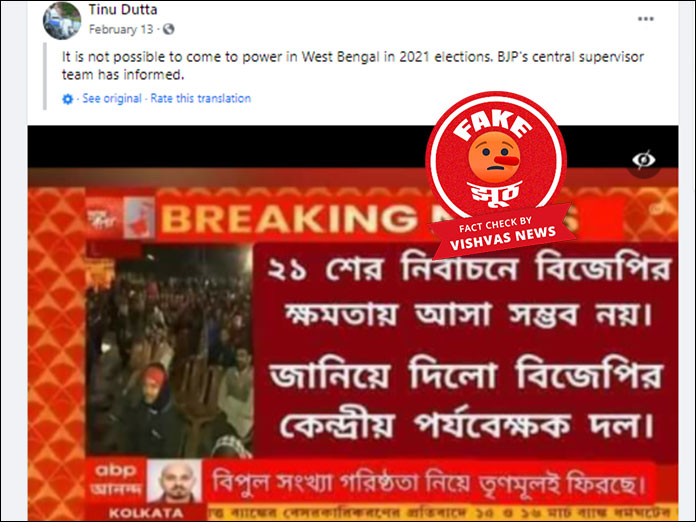 Guwahati (Vishvas News) | A TV channel breaking plate is viral on social media. The text written on this breaking plate suggests that BJP has said that it will not be able to win the 2021 Assembly polls. Vishvas News found in its investigation that that claim is wrong.

The news channel breaking plate was edited. BJP spokesperson clarified to us that the party has not made such a statement.

Facebook user Tinu Dutta posted this image, which reads in Bengali: “It is not possible for the BJP to come to power in the 21st election. The BJP’s central review party said.”

The archive version of this post can be seen here.

We first searched on Google with relevant keywords to search if BJP has made such a statement. We did not find any authentic news to confirm this claim.

The viral screenshot was of ABP Anand’s TV channel. We checked the website of the TV channel to check whether such news has been run on the site. We did not find any such news on any platform of ABP Anand.
We checked the fonts and scripts used in viral graphics. It is very different than the fonts used in ABP Anand graphics. This indicates that the viral breaking plate is edited.

For reconfirmation, we contacted Bharatiya Janata Party state Spokesperson Suranjan Dutta. He said “We also got this screenshot. It is completely baseless. No central leadership has made such comments.”

In the end, we scanned the profile of Tinu Dutta. According to the profile, the man is a resident of Sonari in the Charaideu district of Assam. The person has 1713 followers on Facebook.

Conclusion: According to our investigation, the viral claim is false. BJP has not said that it will lose 2021 Assembly polls. Viral screenshot is also edited.