Fact Check: Government has not decided to introduce FRDI bill with ‘bail-in’ provision, the viral claim is misleading 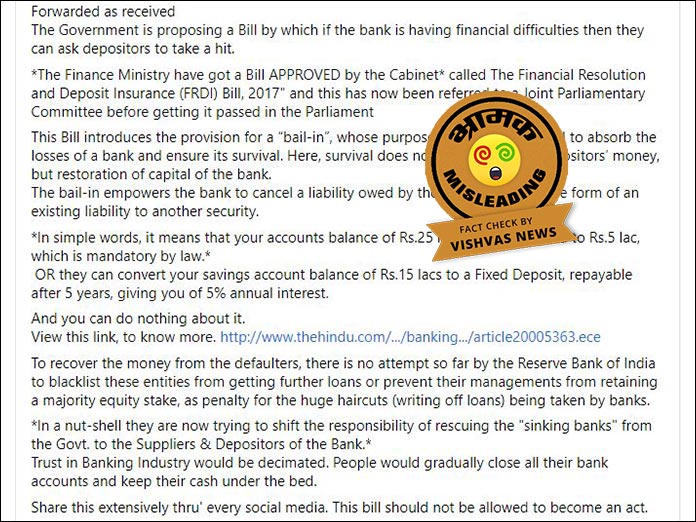 New Delhi (Vishvas News). A viral post on social media claims that a bill approved by the Cabinet introduces a provision for ‘bail-in’ due to which the interests of depositors depositing money in banks can be lost.

Vishvas News investigation revealed the claim is misleading. The bill that claimed to have been introduced was withdrawn. The government has no plans to introduce it again.

Facebook user Krishan Chandra Sharma shared the link of ‘The Hindu’ writing, “Forwarded as received: The Government is proposing a Bill by which if the bank is having financial difficulties then they can ask depositors to take a hit. *The Finance Ministry have got a Bill APPROVED by the Cabinet* called The Financial Resolution and Deposit Insurance (FRDI) Bill, 2017” and this has now been referred to a Joint Parliamentary Committee before getting it passed in the Parliament. This Bill introduces the provision for a “bail-in”, whose purpose is to provide capital to absorb the losses of a bank and ensure its survival. Here, survival does not mean safety of depositors’ money, but restoration of capital of the bank. The bail-in empowers the bank to cancel a liability owed by the bank or change the form of an existing liability to another security…”

We accessed the Hindu article shared in the viral post. The article published on November 9, 2017 explained that the ‘bail-in’ clause, in a draft bill, would change the relationship between the customer and the bank.

We could confirm that the three-year-old news is shared as recent information.

We searched on the Internet for further clarifications about the FRDI Bill. We found an article published on 28 July 2020 by the Financial Express stating that the government has not taken any decision to reintroduce the FRDI bill.

We contacted Rajiv Kumar, Dainik Jagran’s Special correspondent for National Bureau to verify the claim. “The bill was already withdrawn by the government and there is no proposal to bring it back again. The Finance Ministry had shared the information in this regard a few months back,” said Kumar.

In a tweet by the Finance Ministry posted on July 20, 2020 the government said that it has not taken any decision in the matter of reintroducing the FRDI bill.

According to the Economic Times, “The Bill that launched wild rumours all over the country, sowing seeds of distrust among bank customers, now stands withdrawn. The government today withdrew the Financial Resolution and Deposit Insurance (FRDI) Bill from the Lok Sabha.”

The status of the bill on the Lok Sabha website also confirms the information that ‘The Financial Resolution and Deposit Insurance Bill, 2017’ which was introduced in the Lok Sabha on 10 August 2017 has been withdrawn.

Social scanning of the user who shared the viral post revealed that he is resident of New Delhi.

Conclusion: The viral post is misleading. The government has not taken any decision on reintroducing the FRDI Bill.