The viral claim is fake. Government has not levied any tax on school books. 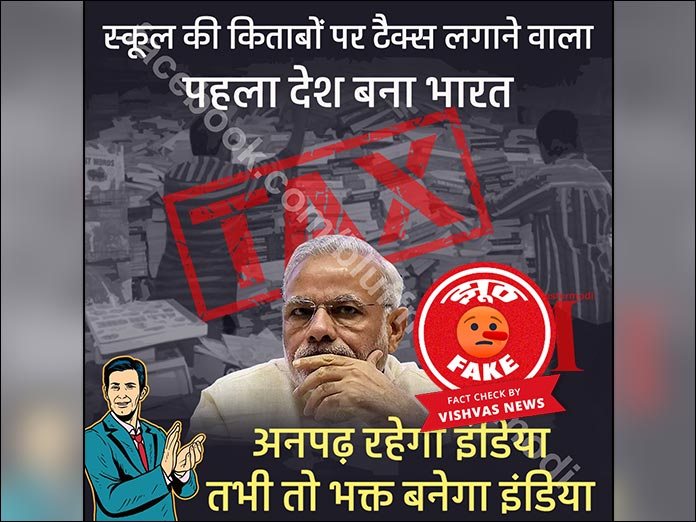 New Delhi (Vishvas News). A viral infograph on social media claims that India is the first country to levy tax on school textbooks.

Vishvas News investigation revealed the claim to be fake. Government has not levied any tax on school books.

More than 5,000 users have shared the post on various social media platforms assuming it to be true.

Several posts on social claim that GST (Goods and Services Tax) is now levied on school books under the new tax regime in the country. We searched for news articles to fact check the information.

We found many websites related to it. The GST rate on printed material like books and newspapers is zero.

We got the same results on the website of the Directorate General of Foreign Trade. In Chapter 49, we accessed the entire list of items where tax for printed books is mentioned as free.

According to the news published on 27 January 2018 on The Hindu BusinessLine, “books continue to remain exempt under GST…”

We contacted Balwant Jain, Tax and Investment Expert and Chief Editor of Apnapaisoa.com to verify the claim. “Books are excluded from the GST filed. As for input tax, there is no such thing on which we do not have to pay tax,” said Jain.

Social scanning of the page that shared the viral post revealed that it has more than half a million followers and is active since March 2013.

Disclaimer: The article has been modified by removing some details which were not required or were irrelevant to the article. The process of updating the story is according to the SOP and there is no change in the conclusion.

Conclusion: The viral claim is fake. Government has not levied any tax on school books.