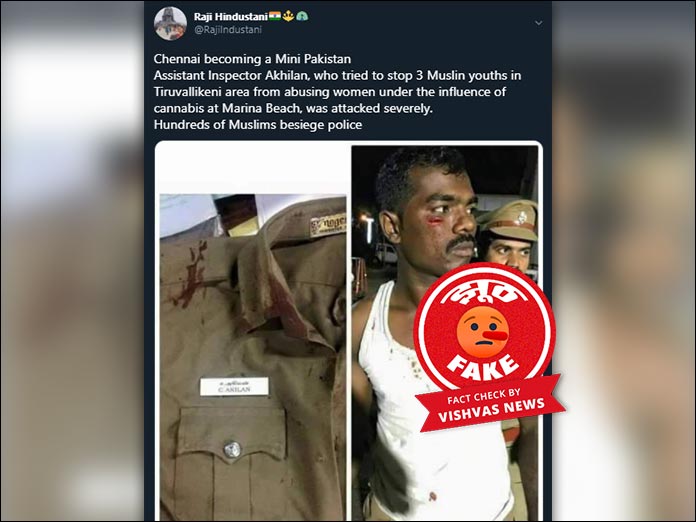 New Delhi (Vishvas Team). Some photos of a policeman and his uniform with bloodstains are viral on social media recently. It claims that some Muslims attacked him in Chennai.

Vishvas News investigation revealed the claim is fake. We found that policeman in the picture is a constable and two Hindu men attacked him at Chennai in 2017. The viral post is fake with communal claims.

The viral post has 2 photos. In the first picture, the police uniform can be seen with bloodstains and in the second picture, an injured person can be seen. The video claims, “Chennai becoming a Mini Pakistan. Assistant Inspector Akhilan, who tried to stop 3 Muslin youths in Tiruvallikeni area from abusing women under the influence of cannabis at Marina Beach, was attacked severely. Hundreds of Muslims besiege police.” The archived post can be seen here.

To investigate this post, we searched the images using Google reverse image search tool. We found this picture in a 2017 Facebook post , with which the viral post was claimed. This confirmed that this picture has been available on the Internet since 2017.

Now with the help of time stamp and keyword search, we found out whether there was any such incident of policeman harassed in Chennai. We found a news published in the Times of India that mentioned about the incident. According to the news, “The incident took place on the night of August 20, 2017 at Marina Beach. Akilan, a soldier of the armed reserve force, had seen two youths consuming liquor on Marina Beach during patrol duty. Akilan approached the men asking them to leave the place; they had refused and picked up a brawl… They attacked the policeman with a sharp object, leaving him injured under his right eye”.

It stated that Marina Beach police later arrested the accused and sent him to judicial custody on charges of attempt to murder. According to the news, the name of the accused was Hari Ram.

We contacted Inspector Jeyaraj of Marina Police Station for further confirmation. He said, “This incident is three years old. The trial is still underway. Both the accused in the incident were Hindus. There was no communal angle in it.”

This post was shared by a Twitter user Raji Hindustani @RajiIndustani . He has a total of 11.5K followers.

Conclusion: Vishvas investigation revealed the claim is fake. Actually it is a 2017 incident, when two Hindu men attacked a police constable. Muslims were not involved as stated in the claims.