Fact Check: MK Stalin did not give this statement about revoking Thaipoosam holiday, viral post is fake 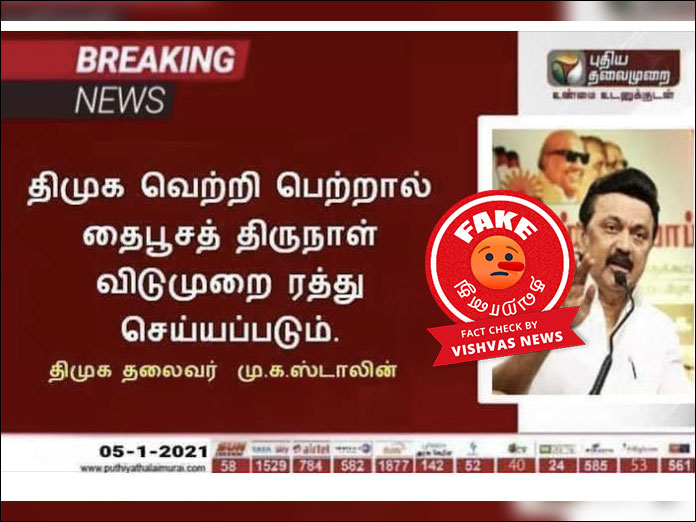 A viral graphic plate quotes DMK president MK Stalin promising to revoke government holiday declared on Thaipoosam day, a festival celebrated by the Tamil community on the full moon in the Tamil month of Thai (January) to honour Lord Murugan. The archived version of the viral post can be seen here.

Tamil Nadu Chief Minister K. Palaniswami on Tuesday declared government holiday on January 28 on account of Thaipoosam festival celebrated in the honour of Lord Murugan. He said the government after considering the request has decided to declare January 28 as a public holiday and Thaipoosam will be included in the list of public holidays in the coming years, according to an article in the Business Standard.

While there was no comment on the announcement by the opposition party DMK, we contacted Puthiyathalaimurai’s web team for verification. “This viral news is fake. We don’t have this style of graphic card,” said Manoj Prabakar, Head, Web team.

Conclusion: The viral post is fake. DMK president Stalin has not made any such comment about revoking Thaipoosam holiday.