The viral post is fake. National Flag was not replaced with Khalistani flag. The yellow flag on the ramparts of Red Fort is Nishan Sahib, a religious symbol of Sikhs. ﻿ 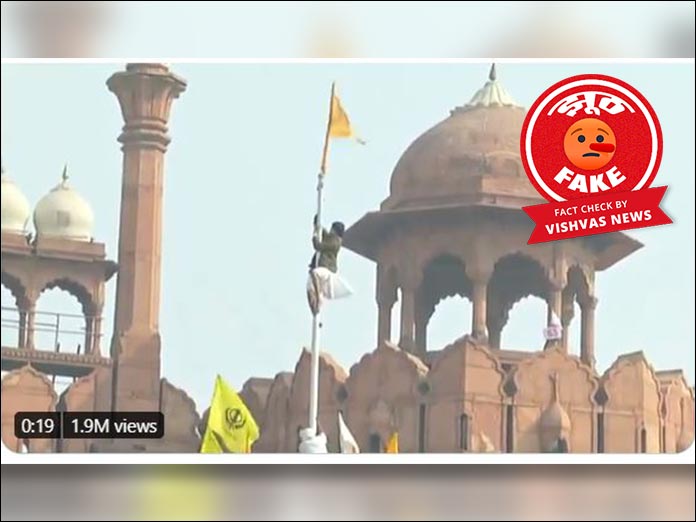 Vishvas News (New Delhi). With India celebrating its 72nd Republic Day on 26 January, many videos and photos about the disruptions during the farmer’s tractor parade are viral on social media. A viral post claims that Khalistani flag was hoisted, replacing the tricolour on the historic Red Fort on the R-Day.

Vishvas News investigation revealed the post is fake.  The claim of replacing the tricolor with  Khalistani flag on the ramparts of the Red Fort  is fake. The flag, put on a high pole by a man at Red Fort is Nishan Sahib, a religious symbol of Sikhs, used in all gurdwaras.

Several users have shared this video footage on social media with similar claims.

The viral post is a retweet of a post by the ANI news agency on January 26. We found the original video posted from ANI’s official Twitter handle.

We observed the video and noticed that at one minute and three seconds, a man can be seen placing a yellow flag on a pillar in  the ramparts of the Red Fort. At the same time frame, we can also see the hoisted National Flag with the usual wave. We could clearly identify that tricolour was not replaced as claimed in the viral posts.

We examined the yellow flag and identified  that it is not a Khalistani flag. It is a religious flag of the Sikhs with their symbol, used in all gurdwaras.

We found many pictures of this flag in saffron colour in Golden Temple complex at Amritsar.

We contacted Dainik Jagran’s Amritsar in-charge and senior correspondent Amritpal Singh for verification. “The flag seen on the Red Fort is Nishan Sahib, not a Khalistani flag. Khalistanis also use this symbol on their flag with script reading ‘Khalistan’. Nishan Sahib is usually in saffron color, but it is also made in different colours. Nihang Sikhs usually make it in blue colour, while yellow and even black cloth is also used in many places,” said Amritpal.

A news article published on 27 January states the  Nishan Sahib is found flying atop every gurdwara’ and is also known as the Sikh flag.

We found photographs of Khalistanis protesting at the Indian embassy in Washington DC in a tweet posted on January 27 by the ANI. We identified the Khalistan flag in these pictures with ‘KHALISTAN’ written in black letters under the religious symbol.

Social scanning of the user who shared the viral post revealed that he is a film trade analyst and has about one lakh followers for his profile.

Conclusion: The viral post is fake. National Flag was not replaced with Khalistani flag. The yellow flag on the ramparts of Red Fort is Nishan Sahib, a religious symbol of Sikhs. ﻿