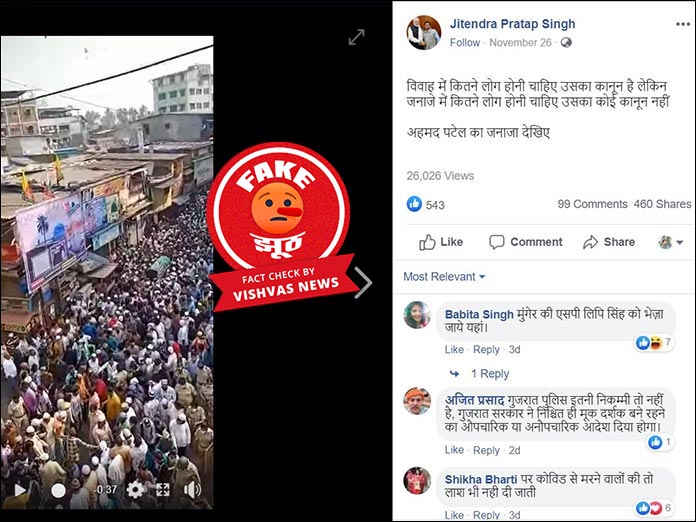 New Delhi (Vishvas News): A video doing rounds claims that it is the video of the late Congress leader Ahmed. The crowd can be seen in the video. Vishvas News investigated and found the post to be fake. The video is of his funeral of MNS leader Jamil Sheikh of Thane, Maharashtra.

Facebook user Jitendra Pratap Singh uploaded a video of a funeral on November 26, writing: “As per the, the number of people attending the marriage is decided but there is no law of how many people should attend funeral. See Ahmed Patel’s funeral.”

Vishvas News checked the viral video using InVID tool by performing Google Reverse Image Search of the screengrabs. During the search, we found a news on the website of Mumbai Mirror. In the news, the same video was used. It was reported that the crowd gathered for the last visit of Jamil Sheikh, president of Rabodi MNS division of Thane, Maharashtra. After the death of Jamil Sheikh, the local people had gathered to pay farewell to their leader.

Vishvas News contacted MNS leader Avinash Jadhav of Thane. He told us that the viral video is of Jamil Sheikh’s last visit. “This is a video of Thane’s Rabodi. It has nothing to do with the Congress leader Ahmed Patel.”

Ahmed Patel was cremated in his village Pyraman in Gujarat. We found a related video on the YouTube channel of ‘Gujarat Tak’. Ahmed Patel died on November 25, 2020.

In the end, we scanned the profile of the Facebook user Jitendra Prasad Singh and found that the user is based out of Ahmedabad.

Conclusion: The video post in the name of Ahmed Patel’s funeral is fake. The funeral shown in the video is of MNS leader Jamil Sheikh.