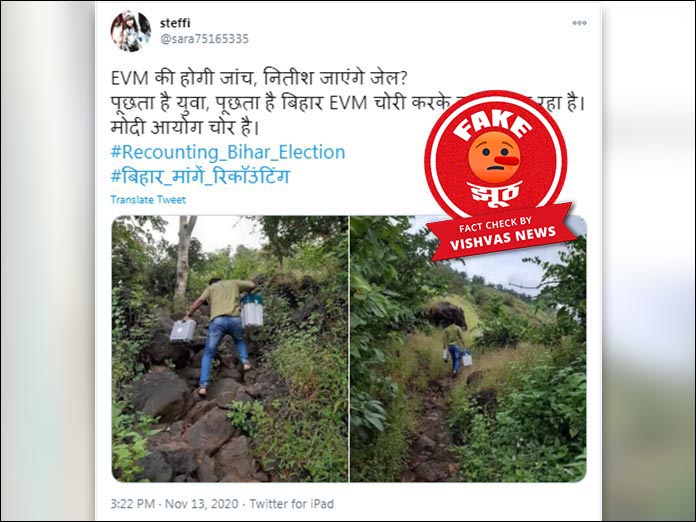 New Delhi (Vishvas News): Even when the Bihar Assembly Elections are over, various false claims are still doing rounds over the internet. Amidst all the claims, there is one picture that is going viral over the internet. In this picture, a man carrying the EVM machines through a mountain path can be seen. Internet users are claiming that this picture is that of EVM theft from Bihar. Similarly, many social media users too are sharing this image with the same false claim on their profiles.

Vishvas News investigated the picture and the viral claims. We found in the investigation that the viral claim is false. The widely shared image is not from Bihar, but belongs to Maharashtra’s Vidhan Sabha polls. The election workers were carrying the EVMs at a polling booth situated in the interior parts of Maharashtra, in Raigad. People are now sharing the image claiming it to be from Bihar.

Translation: Will the EVMs be investigated, will Nitish go to jail? Youth are asking where the EVMs are being taken. Modi administration is a thief. Bihar demands re election.

Investigation:
Vishvas News started its investigation of the viral image with Google Reverse Image tool. During the search, we found the original image on a government twitter handle. This viral image was first tweeted by the District Information Office, Raigad.

Tweeted on 20 October 2019, the tweet shows an election official carrying the EVM to the Kalkarai voting booth, which is located in Maharashtra.

During the investigation we contacted the Raigad Collector Office. During the same we received the information that the image belonged to Raigad Vidhan Sabha polls.

At the end we investigated the twitter handle that had shared the viral images. The Twitter user, Steffi is a resident of New Delhi. This handle was created in the year 2019.

Conclusion: Vishvas News in its investigation found that the claims of EVM theft during the Bihar election are fake. The images going viral in the name of Bihar are originally from Raigad in Maharashtra.