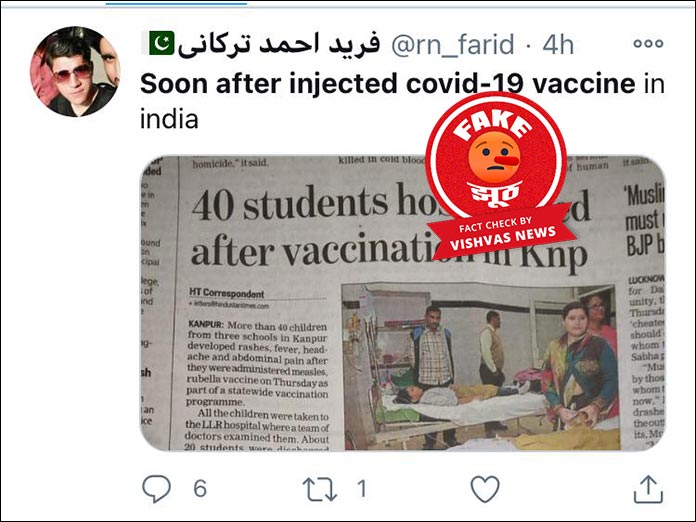 New Delhi (Vishvas News). A viral post on social media with a newspaper clipping of headline reading about 40 students admitted after vaccination in Kanpur is shared with a claim that it is the situation soon after injected with Covid-19 vaccine in India.

Vishvas News investigation revealed the claim is fake. An old incident of students admitted after taking rubella vaccination in 2018 is now viral with fake claim.

A newspaper headline reading, “40 students admitted after vaccination in Kanpur” is viral on social media with a claim that it is the situation soon after injected with coronavirus vaccine in India. The archived version of the post can be seen here.

India has approved two vaccines Covaxin developed by Bharat Biotech and Covishield developed by Oxford-AstraZeneca and manufactured by the Serum Institute of India for emergency use in the country.

India began its vaccination drive on Saturday and a total of 2,07,229 people got vaccinated, the highest day one vaccination number in the world. On day 2 of pan-India vaccination drive, around 17,072 health workers received the vaccine jab against the coronavirus at around 553 vaccine centres across six states namely Andhra Pradesh, Arunachal Pradesh, Tamil Nadu, Karnataka, Kerala and Manipur, states an article in the Jagran.

While a total of 447 adverse events following immunization against Covid-19 were reported during the first two days of the vaccination drive, we did not find authentic reports confirming 40 students were admitted.

Vishvas News contacted Mayank Shukla, News Editor of Dainik Jagran’s Inext for verification. “None of the media outlets have reported any such news recently. The newspaper clipping is of an incident that is nearly two years old. Students administered with rubella vaccine witnessed some mild side effects,” said Shukla.

We observed the news clipping and searched for the news on the Internet using the headline. We found the viral news article published by the Hindustan Times on 30 November 2018 that stated, “More than 40 children from three schools in Kanpur developed rashes. Fever, headache and abdominal pain after they were administered measles, rubella vaccine as part of statewide vaccination programme.”

Social scanning of the Twitter user who shared the viral post revealed that he is from Pakistan and has 1,362 followers for his profile and is active since October 2016.

Conclusion: The viral post is fake. The newspaper clipping shared with the post is at least two years old.