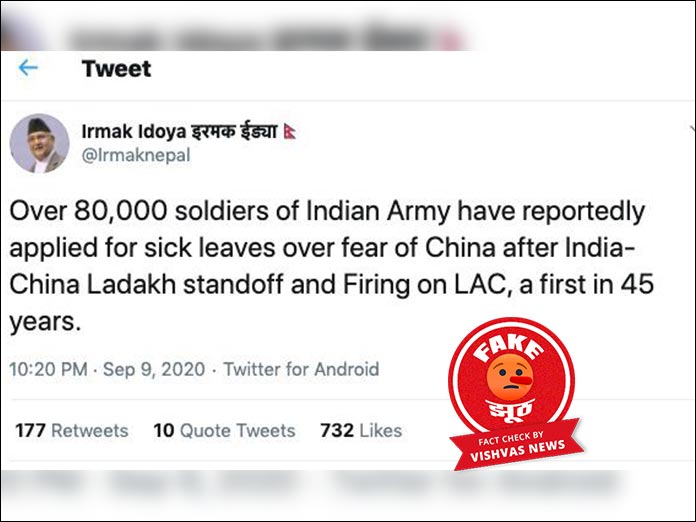 A viral tweet claims that over 80,000 soldiers of the Indian Army have reportedly applied for sick leave over fear of China after India-China Ladakh standoff and firing on LAC.

A viral tweet by Twitter User Irmak Idoya claims, “Over 80,000 soldiers of Indian Army have reportedly applied for sick leaves over fear of China after India-China Ladakh standoff and Firing on LAC, a first in 45 years.” The archived version of the post can be accessed here. The tweet has been retweeted over 178 times and had 739 likes by the time we carried out the fact check.

We found that many twitter users have posted tweets with similar claim.

As our first step of investigation, we searched on the Internet for news article on this context using keywords. We could not find any authentic media source for the viral tweet.

However, we found many news articles on India-China standoff in Ladakh.

According to a report by the Hindustan Times, “Indian and Chinese military commanders will meet in the next few days to discuss comprehensive disengagement from all friction points in Ladakh as the first step towards de-escalation.”

However, there was no information about Indian Army soldiers applying for sick leave.

Social scanning of the twitter user Irmak Idoya @Irmaknepal
who shared the fake claim revealed that the account is active since March 2020 and has 13.1K followers.

Conclusion: Over 80,000 soldiers of the Indian Army have not applied for sick leave. The viral claim is fake