Fact Check: Post Claiming Students Will Not Get Scholarship This year In Uttar Pradesh is fake 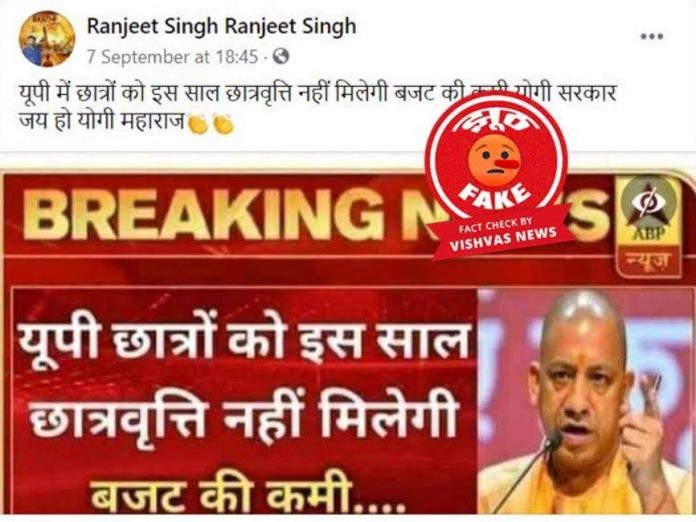 New Delhi (Vishvas Team). A viral post on social media claims that students in Uttar Pradesh will not get scholarship this year due to lack of budget.

Vishvas News investigation revealed the claim is fake. Uttar Pradesh government has not made any such decision.

Facebook user Ranjeet Singh shared a screenshot with ABP News logo with a breaking news header. This screenshot reads: UP students will not get scholarship this year due to lack of budget… The archived version of the post can be seen here .

We searched on the Internet using keywords. In contrast to the claim, we found several media reports that provided information on how to apply for scholarships. Applications for the scholarships can be made on the official scholarship.gov.in website. We also found an official notification about this on Uttar Pradesh Secondary Education Council website.
According to a media report published on August 20, “The state government has released the budget for the scholarship, but the Finance Commission has not got permission to deposit to the accounts of the respective departments for disbursements. However, this report also states that some departments have started online applications for scholarships.

We also searched ABP News website’s YouTube channel, but we could not find any such news report there. At the same time, we compared the graphic plates of ABP News with viral screenshots and found that they are not similar, leading to a conclusion that the claim is fake.

We spoke to a senior editor of ABP News, who clarified that ABP News did not run any such news. He also said that the text font in the viral post did not match with their font.

We contacted the officer in-charge for scholarship in Uttar Pradesh Social Welfare Department. “The viral post is fake. No decision has been taken to withhold scholarships for students in Uttar Pradesh. We already have budget available for this,” he said.

We spoke to Rajiv Dixit, deputy bureau chief of Dainik Jagran’s UP bureau. He also confirmed that no news has come from the department about withholding scholarships.
Facebook user Ranjeet Singh is one among the several users who had shared the viral post and social scanning of his profile revealed that he is from Pune.

Conclusion: The viral post claiming that students will not get scholarship this year in Uttar Pradesh is fake.