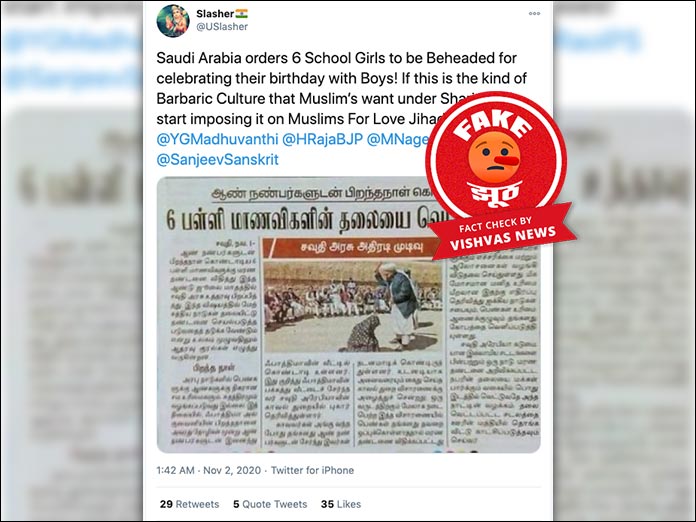 New Delhi (Vishvas News). A newspaper clipping of a Tamil newspaper is shared with a claim that Saudi Arabia ordered six school girls to be beheaded for celebrating their birthday with boys.

Vishvas News investigation revealed the claim is fake. The Head of Legal Committee at Saudi Journalists Association clarified that no such incident has happened in Saudi Arabia.

We found this claim first on Twitter and then identified this claim has been viral on Facebook since 2017.

We searched on the Internet for news about the incident. We did not find any authentic news reports to confirm the claim.

However we accessed several news websites that has published this news in 2017.

We found that the image of a woman getting whipped in front of a crowd published in the viral newspaper clipping matched with the image used in website article. We searched on the Internet using Google reverse image search tool to identify the source of the image. We found this picture on Reuters website uploaded on 1 September 2015 with caption, “An Afghan judge hits a woman with a whip in front of a crowd in Ghor province, Afghanistan. An Afghan man and woman found guilty of adultery received 100 lashes on Monday in front of a crowd who filmed their punishment, TV footage showed. Picture taken August 31, 2015.”

While we could confirm that the picture is not related to the news mentioned in the viral post, we decided to verify the news. We contacted Dr. Assel Aljaied, Head of Legal Committee at Saudi Journalists Association to verify the claim. “This is absolutely unbelievable. This is fake news. People are celebrating birthdays everyday without any problems here. Such incidents did not happen even in past,” said Aljaied.

Conclusion: The viral post is fake. No such incidents have happened in Saudi Arabia as in the claim.